Couple of quick queries if you or anyone would kindly help please?

@waterfall
Year field: In the script you have to find "Year Options". Try to delete "#" at the start of the 3rd row for activating YYYY format.

- did try this but it's then altering the value of "releasetime"?

I'm using the latest version of the scripts

Not possible, as beatport dictates the album artists not me or the scripts.

thanks for the work and the support.
Sorry for a nb question, but i just extracted the files in the source folder, restarted mp3tag (v2.96), and i still cant use the pluggin: it doesnt show in the ui and the shortcuts dont work. Is anything wrong with that new version?

Also, I am struggling to understand what the different scripts do, could you please explain what

but i just extracted the files in the source folder

See here for ways to find the right place for the source scripts:

Welcome to the forum. In the starting post there's a link to show how to install them.

For the keyboard shortcuts you need to press the Alt key then the S key, then the letter A like the example below.

You'll see the scripts shortcuts from the underlined text like so: 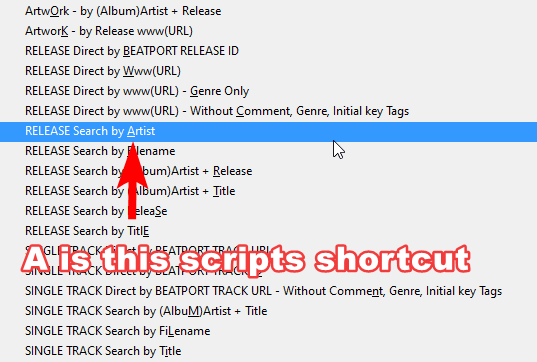 As far as what each script does it's fairly self explanatory from the starting post. If the script has direct in the title then it's when you have already gotten the WWW tag. Then there's artwork, release (for albums) and single (these are for when you only download a single track from a release).

Since yesterday, I get many 500: Internal server Error, when attempting to tag a bunch of tracks. This happens irrespective of the type of Script (Release, Artist+Title, Title, ...), and randomly (some tracks can be found, others can't)

Did Beatport change something recently or is it just me? 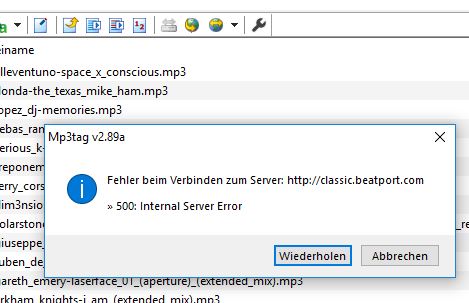 I'll investigate this should it be down a couple of days. Let me know if that's the case.

The site appears to be working though.

It seems that the classic.beatport.com search is broken again. Same 500 error.

yep, still not working for various searches. The error occurs for searches by

In the meantime, you may switch between those, occasionally one of them succeeds.

occasionally one of them succeeds

This usual means there's a problem on the beatports server side. If you google a 500 error it'll tell you all you need to know.

It's real. I've tried to pinpoint exactly what queries cause this 500 since some searches will work while others won't. At first I thought that mp3tag will return 500 if there are more than one word in the query, i.e. queries by Album such as "Anything Goes" will fail every time, while "Anything" will always return results.

But then I tried other words such as "Uniformity" and "Society" and they were failing as well, while the two-word queries "FD CTRL" and "Woo York" were working. It seems arbitrary.

The only good news is that tagging via WWW(URL) works without fail.

@stevehero: What could be causing this behavior?

If we can narrow down the issue, we may be able to build a quick fix for this.

Searching by Artist+Release produces the error, while Artist only does not

Searching manually on classic.beatport.com itself fails quite regularly: "Oops... looks like there was a problem with your request."

Then it's not a problem with the script as it uses the classic search url to parse the info you see in the first UI. When beatport fixes the problem, this issue will be resolved.