I'm sorry to bring the more than 4 years old topic.
Like @Zerow I also found that the upsampling result exposes some hidden area of the sound. and it does sound better also noticeable with the right pieces of equipment.
and I believe that the sound should not be treated as the same mathematics in digital, something always dissolved into the computed digit 010101, and then that codes always could be converted to analog without losing the original analog or almost the same quality.

Everywhere on the audiophile forum, this kind of topic never ends, and so far until 2020, it seems nobody knows the truth. or even though he does, many disagree, as my post will sure get disagrees.

I'm sharing what I found, in the test results, I have been upsampling many of old mp3s and then compared to real vinyl rip, I could not find the big differences after upsampling.

Many people from other forums are saying it is added noise, and I agree, yes that is part of true, some files do make noise after upsampling but that's not all cases, I would say 25% from my experiences. most of them got improves in quality without making the noise.

I have been testing hundreds of different converting, mixing, sampling and I still could not find the real answer for this argument, and still getting confused. it's been almost 10 years, maybe some people have master degree in audio, and some are a real genius or have special ears to judge everything which might be far better than my testing period.

Like how many of us would pass the blind test where the certain bitrate nowadays that didn't even reach the middle quality (not mp3)? There was an audiophile contest in South Korea and surprisingly mostly ALL of them failed at the 160Kbps test at round 3.

It seems noise or something garbage that should not be there after upsampling,
but I love that noise, it sounds like a real instrument to me so I would rather have that noise in all of my collections, therefore, I don't believe it is noises,

and the vinyl sounds always good, and those are 48khz. however, audio scientists (?) is saying humans can't hear above 40khz. Maybe that is right, I don't want to disrespect their testing result or science, so here goes philosophy over their science about missing 8khz.

"Though free to think and act, we are held together, like the stars in the firmament, with ties inseparable. these ties cannot be seen, but we can feel them." -Nikola Tesla 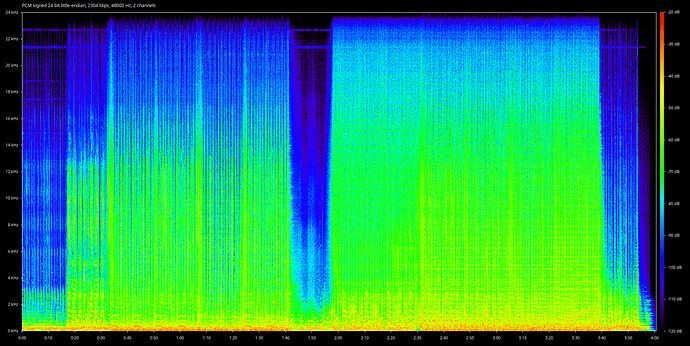