I see there's a whole bunch of updates to this in the latest release. Thanks @Florian.

Would it be possible to have an RMB context menu to sort them A-Z or Z-A?

Added sorting by name (and by enabled state) with Mp3tag v3.02b (sort twice to reverse the order). Thanks for the suggestion!

Great. Thanks for the very quick turnaround.

I've just tested this and it doesn't sort by name when there are actions that start with a lowercase letter. These get sorted at the bottom below the last item.

Also, actions that start with _ for example have the same behaviour and are at the bottom. 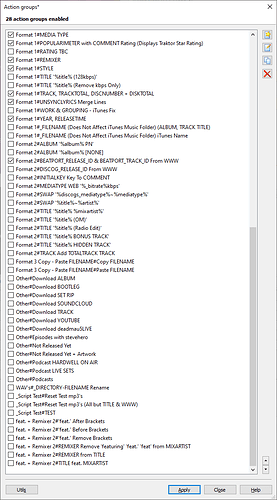 Thanks for pointing, will switch to natural sorting with the next version.

Sorting should work as expected now with Mp3tag v3.02c.

Can a sort only highlighted items be done so I can sort a subset of actions.

Yes, that would be a nother logical thing to be implemented

Totally agree with you. Hopefully, Florian will implement that soon.

I wonder how often in a life of an action group it is necessary to sort a bunch alphabetically.
I see it as a nice feature if you have gathered a number of action groups over the time and then get them together if they are spread all over the list.
It is also nice to have them grouped together if one has devised some kind of naming scheme, esp. in repect to submenus.
But from them on ... I don't know.
The order of the action groups also sets the order of them being executed when one selects more than one action group.
So I would have to watch out that another attempt to sort still keeps the proven order which means that I have to think of a naming scheme that will grant that order even after sorting.
Or the other simple way would be - and that is available right now:
Sort the action groups once, move them to the required order and every new action group then gets inserted in the correct place - so that no further alphabetical sorting would be necessary, on the contrary, would even be counterproductive.
And all that in respect to my kind of workflow. Others may work in a different way.
I just wanted to point out that I will be able to live without that feature for some time to come.