I just had to update MusicIP Mixer's database with BPM values and used a command-line exe as "tool" inside MP3Tag for this. I ran it on a sample 4,255 files and have the following feature requests: 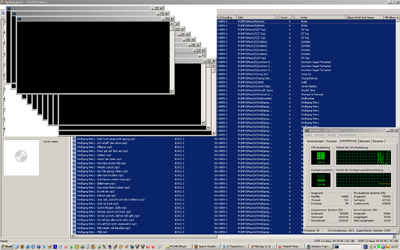 Would it be possible not to run all processes at the same time but instead proceed to the next file in the list only after the current one has finished execution, i.e. handle all files sequentially? I guess this would make to "Tools" function much more versatile (if selectable), it could then also be used to spawn processes that can handle only one instance running.

Since most tools used would be small command-line tools anyway (I think), there'd be not many problems with having to keep a DOS window open and maybe wait for user input or the like.

What do you think?

maybe you could use export function instead of Tools to create .bat files. In that file you could use the start command with the /wait switch. In this case your .exe will be called sequentially.

Hee hee, a workaround for the workaround! (Thanks for the creative idea, Stevest!)

I came up with the following »Export« which will actually create a BATCH file to tag all three (BPM, ORIGYEAR and LANGUAGE) into the Music Mixer Database:

As you can see, I preferred directly pointing to both the location of mmmexec.exe and the newly created mmm.bat so that everything has a »defined location" and isn’t dependent on PATH variables or the like. The resulting mmm.bat file can be executed either manually or by selecting »Yes« when MP3Tag Export asks you whether the file should be »displayed«. (Most systems have .bat associated with the command processor.)

Important note: Always specify the »window title« parameter with the START command—otherwise Windows will mess up the parameters given to the executed program!

Still, I very much hope for the above requested feature …

EDIT: Please use with care! I just found out that this will presently not function with file paths containing non-ASCII characters. I have written a feature request asking Florian to implement an export file encoding that is compatible with Batch Files.

The good thing is: You can still use the scheme—in a way: Answer »No« when asked for displaying the export file, use an editor that can convert ANSI to OEM codepage to edit the generated mmm.bat file, and then execute it manually. — A workaround for the workaround for a workaround …

To say the truth, I myself use some batch-file-based workarounds (for example to create multiple files with only one export, to move complete folders - including audio files, pictures, pdfs etc.).

Well, I am an engineer, and the engineers' most important attribute is laziness. I always rack my brains how to make things easier. So I create action and export scripts. And if there is no way to do things, I try to find workarounds. Me sluggard.

I'm pleased to help you in some way.