There are people with various physical disabilities, you know

I am pretty sure that these persons know very well how to use the built-in functions in Windows
[...]
like pressing additional keys.
[...] 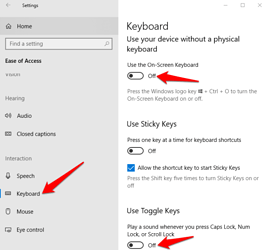 [...]
But this reminds me of the situation when I asked my bank, how are people using a wheelchair suppose to enter their building
[...]
additional costs for disabled for using their services
[...]

The modifiers Ctrl, Shift, Alt Gr and Alt are absolutely common keys in the context of Windows
[...]

So... are stipulating that in order to be able to use only mouse for such basic task as OK, a person can just press keyboard keys, so that a virtual keyboard will be evoked - and then used for further [software] "pressing" of keyboard keys? Of course a mouse user can gain access to virtual keyboard by clicking and icon - but that is precisely the mentality of that bank employee who suggested using the obvious workaround, despite its additional costs

Or did I misunderstood your answer and you were just saying in diplomatic words that if a user cannot use keyboard for whatever reason then such user should not bother using Mp3tag or even Windows at all - and that there is absolutely no need to further ease access even for people with physical disabilities? If yes then once again this is a showcase of that bank mentality of "we personally do not have such problem - so take care now, bye-bye"

I think it is a stretch to make these suggestions. In the case of any program that involves mass editing of text, one would have to expect (not assume) that some general method of entry to be required including the keyboard, or some similar device. The OS has a job to fill with any program for the backbone of the system, and in the specific special use cases you have raised, certainly has to fill that roll to enable that ability.

I don't believe there has been any suggestion that

"we personally do not have such problem - so take care now, bye-bye"

but rather the opposite - there are many action and filter features that have been added and improved to make such repetitive functions easier. Not to mention that the entire purpose of mp3tag was to simplify the process of editing metadata in the first place.

As they say - "If it was easy, somebody else would have already done it!"

I've decided to close this topic after it further digressed into an off-topic discussion. I also don't want to encourage further discussion regarding ease of input as some of it became rather personal and switched from a listening perspective to a more accusatory nature.