How to import lyrics from likenamed textfiles in batch?

How can I import lyrics from like-named textfiles in batch?

The BATCH thing is important.

So, let's say I have two files:
song.mp3
song.txt

How then, do I get the lyrics from the text file into the ID3v2 Lyrics field? (I guess its called %unsyncedlyrics%)??

I managed to do this for ONE song, the annoyingly named "manual" operation, but I would very much prefer to do it in batch.

I've discovered that Convert Lyrics From Lyrics3 to ID3v2 is not possible cos mp3tag does not read Lyrics3 stuff.

I would appreciate it very much , if you can recommend a Lyrics3 exporting program!

I have not tried this out:
There is an action called "Import from Text-file"
It allows you to enter a filename that could consist of a variable, in your case %_filename%.
As target you have to specify a field - this would be "UNSYNCEDLYRICS".

Now: for other imports MP3tag expects a record to consist of a single line and the "end of paragraph" character is treated as end-of-record.
So it could be necessary that you replace the line-breaks in the text file with something else (like a #) first so that the whole lyrics become a single line.
You would then have to reconvert these # in MP3tag once you have imported the text. 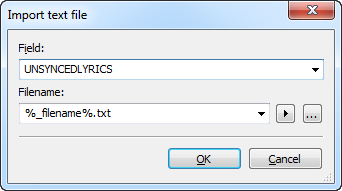 However, I'd like to do that in batch, preferably via a playlist.

And I am confused, if I wanted to add the lyrics to 10 files at the same time, should I then create ONE textfile like this?

if yes, what is the syntax? For example, what do I do use as CR/LF character? Should I even use double quotes?

However, I'd like to do that in batch, preferably via a playlist.

Not sure what you mean. You can use the action that Dano described above and apply it to multiple files. That's your 'batch' processing. If you're asking how to select the files to apply the action to, then you may want to see if you can use a filter if you can't easily select them manually. I've never tried loading files into Mp3tag using a playlist; I'm not sure it's possible.

And I am confused, if I wanted to add the lyrics to 10 files at the same time, should I then create ONE textfile like this?

You said each lyrics text file has the same file name as the audio file. So look at the action described by Dano. %_filename% will be the file name of each music files (minus the extension), so they should match up 1:1. You would select multiple files in Mp3tag and apply the action. And the text imported into each audio file should be the text contained in the .txt file with the same base file name.

if yes, what is the syntax? For example, what do I do use as CR/LF character? Should I even use double quotes?

The syntax within the lyrics text files? That won't matter much to Mp3tag. It will import whatever is there.

EDIT: I've upgraded to 2.53
didn't help.
I used the Convert thing Tag -TAG, but the only thing that accomplished was to put the name of the textfile into the lyrics field, not the content of the textfile. That suggd.

I'm bordering on the suicidal now.

Import text file
Imports the contents of the text file specified by the absolute or relative filename into the specified tag field. You can use placeholders like %artist% or %album% within file name.
Example: to copy the content of the file lyrics.txt to the lyrics field, set the field to UNSYNCEDLYRICS and the format string to lyrics.txt.

Sadly, there's no Action called Import text file under the Action menu, just "case conversion", "standard", "cd-R"
So, how do i find or create that Action?

And believe me, I've looked.

And Convert | Text file - Tag" doesn't do it either, it gives me the wrong dialog box, not the picture Dano uploaded but something with "Filename:" and "Format string"

Use "Actions > Actions (Quick)" and you can immediately choose the action type.

Or if you have opened the normal actions then follow these instructions:
/t/967/1