ID3v2.3 tags to ID3v2.4 tags due to character display problems on Android

Hello, I have a problem with tags. My SamsungGalaxyA50 Andriod11 One UI 3.1 in Samsung Music probably can't process ID3v2.3 tags. When I move songs from my computer to my phone I always see weird letters. I'm from the Czech Republic and we have a bit of specific letters in our alphabet, but even so, it worked for me until recently. I noticed that my phone probably only supports ID3v2.4 tags. Unfortunately I don't know how to convert ID3v2.3 tags to ID3v2.4 tags. I have Mp3tag software version v3.06a. Please advise. Thank you for the solution.

This is astounding as V2.3 tags are supported much more widespread than V2.4.

Check Tools>Options>Tags>Mpeg which kind of tag version you write. Preferably, this shows V2.3 UTF-16.
If it shows V2.3 ISO ... then the characterset requires a specific code page.

A remedy would be to load the files and then press Ctrl-S to save the tags (again) but this time with the new encoding.

I tried your solution, but unfortunately it doesn't work. I have this on in the settings: picture 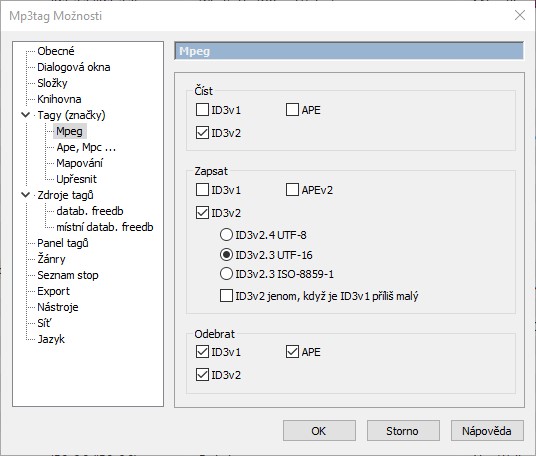 If you insist on V2.4 tags then you can change the tags to a different version wth the other options. So for V2.4 set write to V2.4, load the file and then press Ctrl-S to save the tag in the new version.

If you add a column with the setting for
Value: %_tag_read%[ (%_tag%)]
then you can see in that column which tags are in the file and which one you see.

If I choose the ID3v2.3 UTF-16 option, it will write weird characters.

Where do you see the weird characters? In MP3tag?
You could try an action of the type "Convert codepage" to get from the local codepage to a more international format.
ID3V2.4 has a cover but I don't know if you have written ID3V1 tags previously. What does your extra column say about the tag versions in the file? If there are V1 tags then it could be that your player does not understand V2.4 tags and reads the V1 tag instead which has no cover.

Everything is fine in Mp3tag, I see everything correctly there. Only when I switch to ISO-8859-1 do the diacritics disappear. The problem occurs when I move a song to my cell phone. Then everything changes on the phone. The picture shows a sample. I had the music in Mp3tag set to one album (UTF-16), but after transferring the music to my mobile phone, it was divided into three albums with strange names. What do you mean by the "Convert codepage" action? 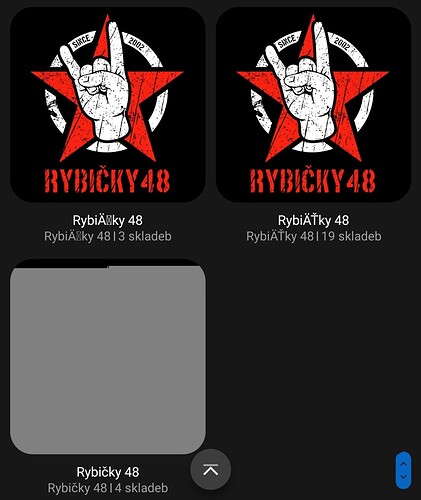 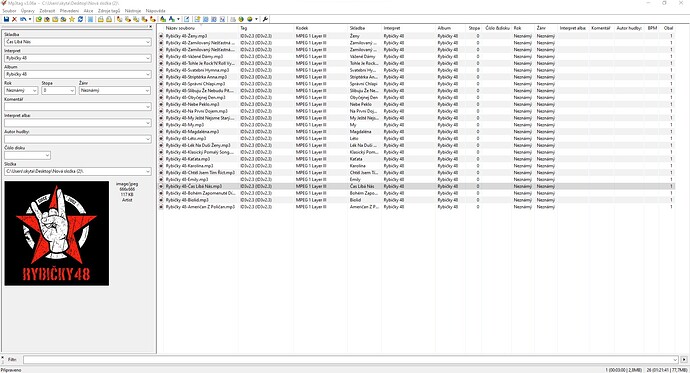 If the files look good in Mp3tag, there is no need to convert the codepage. It's simply your phone not supporting the ID3v2 standard to it's full extent.

If I choose ID3v2.4 UTF-8, my album art will not load, but the characters are correct.

This is promising. Maybe your player simply doesn't understand unsynchronization. I have an update in the pipeline, which you might try later.

Until then, there is very little to do

It's weird because it worked normally a week ago.

With the ID3v2.4 UTF-8 option or something different?

Is there also the same top version in the Windows Store that I can download from your site? (I don't mean beta)

Just for the record:

U+00C4 is Ä and U+008D is the invisible control character REVERSE LINE FEED, which may be rendered as a crossed-out box. ISO 8859-1 is the same as Unicode for the first 256 code points, but it is of course limited to 8 bit/character. 0x8D can safely be treated as unassigned there, and coincidentally it is also unassigned in Windows-1252, which does reassign most neighboring 8-bit codes.
So what’s happening in the upper left picture is that UTF-8 text is displayed as if it was encoded in Windows-1252.

Hi, I have similar problem. I´m using Pixel 2 and JetAudio+ 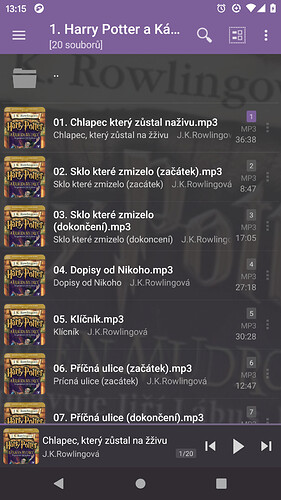 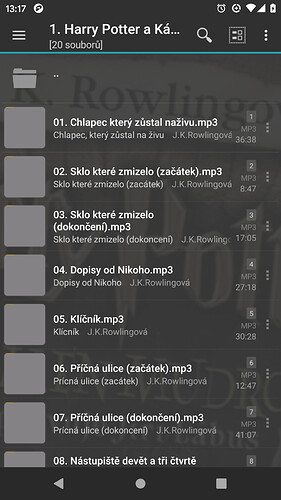 Excellent! It's probably due to this change:

CHG: not using ID3v2 unsynchronization scheme anymore when writing ID3v2.4 due to compatibility reasons with apps that don't implement the standard.

Saving as ID3v2.4 with mp3tag = cover not showing in Serato Fixed Bugs

Just wanted to give a quick update here: it's actually an issue with Serato, which is not implementing the ID3v2 standard in this regard. However, the unsynchronization scheme was initially invented to not irritate software that isn't aware of ID3v2 tags. So it's very unlikely that not applying the unsynchronization scheme would cause any harm. I think most — if not all — of the apps that work with audio files are ID3v2-aware now. This is also the reason why I think that Serato and others are u…

Hi, I finally managed to get the correct display of characters and images. In Mp3tag, I deleted all tags in all songs, including pictures. I left only the names of the songs themselves. When everything was deleted, I added tags, but using the name-tag function. Then I added pictures and it was done. I deleted everything and saved it in utf-8 format. And the Mp3tag version I have 3.06d. Version link: Mp3tag Development Build Status