I made a list of frames which are mentioned in the ID3V2 standard but which are not supported by MP3tag:

I compiled this list for ID3V2 frames to show that by far it is not just the PRIV frames or the SYLT frames which will result in findings with %_id3V2_unknown_frames%.

Yes, wherever I referred to the new field I've used " e.g., PRIV or SYLT" which is "for example". It was not meant to be an exhaustive list.

I would very much appreciate a section in the extended tags dialogue that would show a list of unknown (or unsupported) frames with their genuine standard name.

I've made a note on my internal wish list, but it's not very likely to happen anytime soon. Mp3tag's internals have no concept of unsupported fields and this would require a massive re-design of core parts of the app.

It was not meant to be an exhaustive list.

Yes, that is what I thought.
But then I thought that it would add more insight if there were more names so that concerned users might make a more elaborate guess as to what the findings could mean.

E.g. I just stumbled across a set of files with the TSIZ and CTOC frames.

Thank you for the entry on the internal list. Some things just have to mature.

Since the invention of the %_id3v2_unknown_frames% variable I have a column with this.
At the moment it shows me for a lot of files a RGAD-frame and I have not the slightest idea what this means. Obviously it refers to files for which the lyricator-script of Mediamonkey found lyrics. In these cases Medamonkey saves the file and sometimes adds tags, i.e. it reads the lame-header for it's replaygain and creates an ID3v2-tag with the found value.

Maybe we could use this thread (or a newly created) to make a list of frames that can come up there and there meanings, als Ohrenkino started here?

I finally had some time today to look into removing some of these unknown frames I found in my library. I tried the method from this earlier post and had no success at first using the cut/paste method.

What exactly are these "unknown frames? I loaded my music library and defined a column for %_id3v2_unknown_frames% and indeed there were some indicated. I had a look in the extended view and was satisfied with what I saw - all tagfields I wanted were there. So I decided to get rid of these "unknown frames" and tried this with Copy/Delete/Paste. The defined column and also a filter showed that these frames were gone. But: I have a lot of symlinks to albums for special purposes. When I loade…

Even when I confirmed I was using the "Cut Tags" tool and not "Copy" the tags were not being removed. I found that this was of course related to my settings for removing ID3v2 not being checked, as typically I don't want this to happen when using the Remove Tags tool. I didn't realize it also affected the Cut Tags tool. 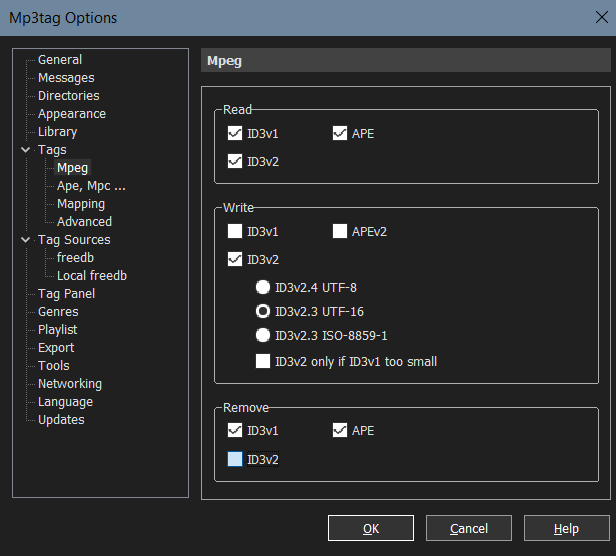 Once I added the check for this option under Remove (all three), the cut/paste option worked and I can confirm the %_id3v2_unknown_frames% were then removed from the selected files as desired. This was an oversight on my part, but hopefully noting it here helps anyone else that is having this issue.

If anyone needs to remove specific unknown frames there is a command line tool GitHub - squell/id3: ID3 mass tagger that can do that 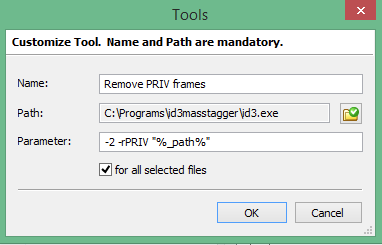