Is there another field like "Genre" with user add possibilities

Hi,
Is there any possibility to have a field like the "Genre" one, that has a user-defined file, able to insert extra options (genres/styles) to choose from?

My thing is: I'm using field "Comments" as Country (believe that doesn't exist in ID3v2 tag...), and would like to have the option to choose from a user-defined list... like the Genre field can do!

Any chance! Is it already there, in the program and I didnd't see?

Can anyone help, please!?
Ricardo Freitas

No, there (currently) is not.
See e.g. this thread:

Hi I am currently adding tags to a lot of Latin America audio tracks. In the tag panel I have added fields such as MOOD, COMPOSER, etc.. Due to the nature of the Tag information there is a lot of information duplication, especially MOOD (which I titled Rhythm/Mood). Therefore, the reason for this enhancement proposal. In the next version of MP3TAG, it would be useful to allow the User to create their own drop-down lists, similar to the "Genre:" field. As in Genre, the "empty", and items …

Thank you @ohrenkino for your reply! Sad though...

Such a good idea to implement!... Hope @Florian will think of it some day!

The usual advice for a workaround is to create a number of actions of the type "Format value" that set the data for the specified field(s).
Such an action has the advantage that you can set several fields with just one call of an action.
The genre field is special as for this the standard defines the values.

@ohrenkino
Think I've got it... And already tried! But that seems to request a "string" for each action, right? That would mean that my 80+ countries would need 80+ actions! Or am I wrong?
No possibility of a drop down list being able to choose a name...

Guess not, that would be to much!
Anyway, that suggestion was very nice, it'll serve me in another situation. Thank you again!

If you do not know this already, I would like to draw your attention to this thread: 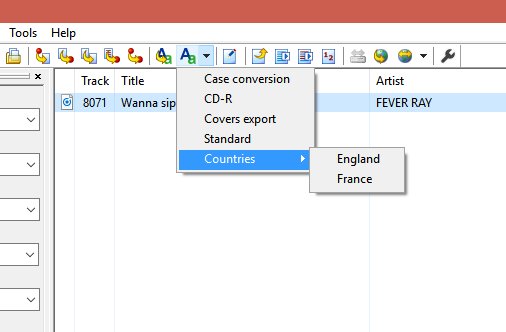 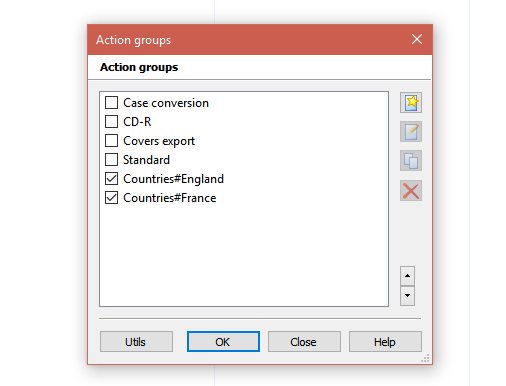 If you really have tracks from more than 80 countries - I think that the main benefit with actions is that you shortcut repetitive (or error-prone) manipulations.
So I would think that a list of countries that you use most would help you best.
All the other countries, those that appear only very few times, could still be entered manually.

Yes! Your last comment is EXACTLY what is was thinking!!! (And yes I have a "small" eclectic playlist, up till now with 8100+ tracks from 79 different countries!). I can do the top 20 or so with Notepad+ in a minute or two!

One of the tracks is from a band called Bliss, which I'm listening now, and it's called "Long life to you my friend"... Entirely what I'm wishing you at this moment!!!

A plain THANK YOU is not enough @ohrenkino !