Isrc in mp4 does not appear in Windows Explorer

But isrc copyright tags when it's MP3 and Wave. I don't understand why it doesn't appear the same way in Windows Explorer - Whats happen?

Please use German or English in this forum.

Friends of MP3TAG, the topic copyright - ISRC in "file property" windows, do not appear ISRC information, all MP3 and WAVE files appear normally.
Is there any way to solve this? The Grateful One. Eron

It is not within the scope of MP3tag to add features to the Windows Explorer simply by adding a tag field.
So if Microsoft has decided not to read the standard fields then there is hardly anything that can be done by MP3tag.
See also here:

But isrc copyright tags appear when it's MP3 and Wave. I don't understand why it doesn't appear the same way in Windows Explorer

Did you read the linked thread?
I think that is a fairly thorough discussion of the problem.

Again: the "why" question in respect to certain features in third party programs (here: Windows Explorer) has to be asked in the support section for that program - which would be Microsoft.

If the data appears as it should in MP3tag, MP3tag has done everything right and all it can do.

And to be honest: I haven't seen ISRC data in any of the mentioned file (and tag) format: neither MP3, nor WAV nor MP4 as part of the file properties dialogue in Windows. 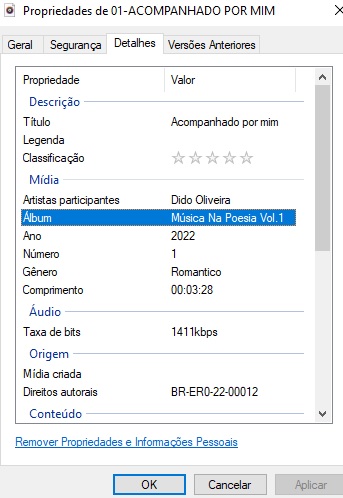 This file is a wave - it appear ISRC on IE Windows, is the same to MP3.
Copyright = Direitos autorais
Thank You

ISRC is not equal to COPYRIGHT
See also the mapping table

Overview of all available tag fields, their names in Mp3tag, and how they are mapped to the internal structures of the different tag formats. Mp3tag is the universal Tag Editor.

I do not see ISRC, I see only COPYRIGHT.
The discussion about COPYRIGHT can be seen in the already linked thread.

This topic was automatically closed after 23 hours. New replies are no longer allowed.