this happened with the previous two versions i've installed (i know v3.11, and i THINK the previous version to that was v3.10 but not certain). i've not had time to dig into this further, but can continue to narrow down to help y'all out, it's the LEAST i can do!

the issue is... after successful upgrade (was v2.95 & was in std appearance, now considered 'light'), opening the app comes up dark. go to appearance and change from "default" (my system, Win10 is Dark theme) to "light". work in it a few minutes (10-15?), then you'll see a textbook "glitch" like it's 'confused' (honestly, what you would envision a 'glitch' to look like), and goes to dark mode. 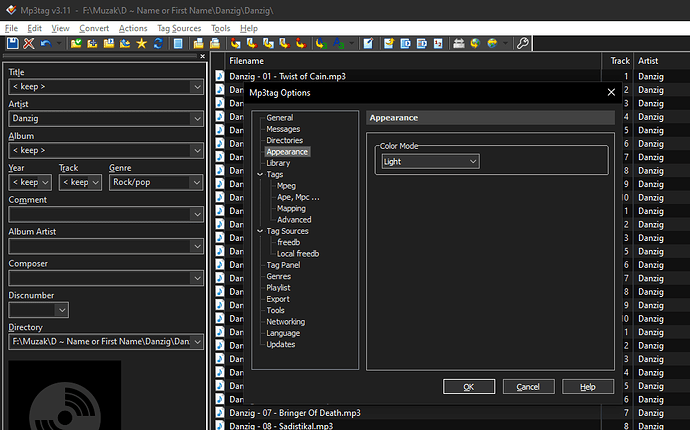 i've had to uninstall the last 2 versions because of this glitch, and go back to my v2.95 (last version i upgraded to before attempting what i THINK was v3.10, then again w/ subsequent v3.11).

let me know if you need any additional system info (other than Win10 Pro), extended app info , etc.. and just for the record... although i'm a firm believer/supporter of dark mode (WAY easier on the eyes), i do think reading things en mass is easier in light mode (maybe it's just me). it mimics black text on white paper, which is the only thing i can think of.

but because of this, i actually like 'light' appearance anyway. but, thought you might want to know of the potential bug/glitch. it's quite possibly just me, but leaning towards not.

thx for everything y'all do!!

I came on to say that I'm seeing this as well.

Thanks for pointing! This should be fixed with Mp3tag v3.11b.