Hi.
For a full understanding of what the Actions do, please read the Readme file.
I'm removing all that text from here to make this post shorter and up to the point.

Changes in Last version only:

For the remaining changes, please read the changelog. There were lots of them in v3.0
All fixes from posts 10-12 were already attended since v3.0.

I would like to thank users from this thread, as well as DetLevD and Ohrenkino for their indirect help with all the answers they provide in the forums. 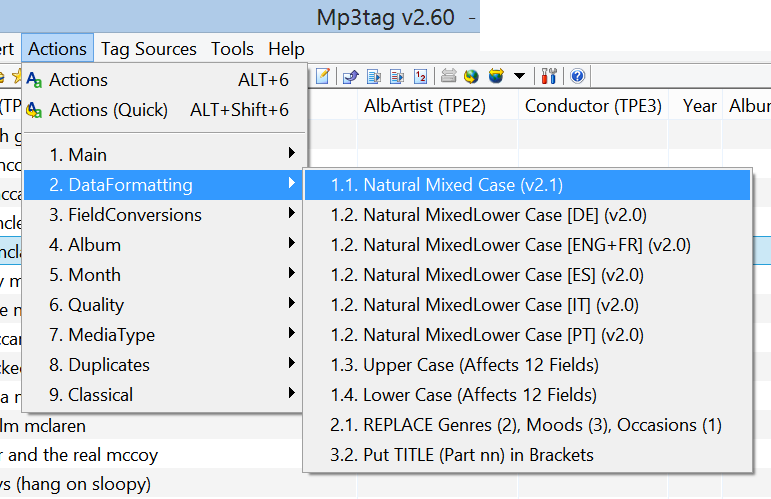 The Case Conversion Option ::: Title Case vs Mixed Case
RFC: Case Conversion
How to put a capital letter in the beginning of sentence without the button of shortcut?
Help regarding tagging, esp. case usage
Case Conversion
Case conversion on Performer field messed up artists names
Names With Apostrophes
Mixed case for French language?
Nature February 11, 2018, 10:13am #2

Hi Nature,
I wonder if you can incorporate the following into your actions.
Very many Scots have Mac or Mc as part of their name eg MacDonald, Macdonald or McDonald. Clearly this must be difficult to create an action for although the Mc is always(?) followed by a capital.

Actually, it's usually Mac for Scottish people and Mc for Irish people.

It is very common in names of people from those countries. The MacDonalds were one of the biggest scottish clans... not to be mistaken with McDonalds (the Burger fast food), from Ireland ancestry.

[EDIT]
Apparently it's not 100% reliable the connection I thought (and the teacher who told me that) as for the ancestry of Mac and Mc. It's still true for most cases, but not all.
Anyone can check it here (just 2/ min reading, and clear)
http://www.scottishhistory.com/articles/misc/macvsmc.html
[END EDIT]

Although those are not that common on music/track names... Never found a track with such a name, but there must be a few ones for sure.

Amazing how I forgot about that one.

Thank you for remembering me.

It won't be difficult to add, I guess...
But I'll have to set up some testing and it takes time, and I'm very busy today and tomorrow.

Perhaps tomorrow at the end of the day.

...
Although those are not that common on music/track names... Never found a track with such a name, but there must be a few ones for sure.
...

Just to give you a little impression

and many more ... But watch out for all the MCs like Bomfunk MC etc.

Just to give you a little impression [...]
and many more ... But watch out for all the MCs like Bomfunk MC etc.

Thank you. This was very helpful as a starting point.

I managed to update the main Action to work considering all the cases shown and even a few more. Go and check it

I've tested it against a new Test library which I also include.
I changed all the Attachements so I advise you to get the new ones for v2.1, which I just uploaded.

Let me know if what you think.

Am enjoying using your Actions and currently most bases have been covered.
Hope you don't mind if I post anomalies as they occur as I am currently working on my library of some 26,000 files and anything I came across may be useful to others.
BBC and B.B.C.
BB and B.B. (as in B.B. King)
Ac/Dc
LA and L.A.
I reckon these need sorted

Hi!
No, I don't mind it at all.
In fact, I appreciate it because my intent is to use them myself, too, so the more reliable those actions are, the better for me too.

And since I don't have a collection of 26000 files your help is really welcomed.

It would be important to let me know in which fields those words appear, because each field requires a replacement, and I intend to do it only on the fields in which they are really needed. Less work, less bugs (in case they happen) and faster processing when you run the Actions. So we all benefit.

And Thank you for the ones you already posted

So I propose this arrangement:
You go and take care of your library.
Take note of all the situations (words or expressions) that you think that should have a special treatment and then post them here. Of course you can post as you're doing it.
When you think you have finished taking care of your library (all those 26000 files) let me know.

I ask you this for two reasons:

And again, thank you for helping me to improve the actions.

I added the 2.1 version to my routine. it works well.

found a bug though... the MacXxxx conversion converts the word Machine to MacHine, and probably every word with Mac starting it.

Hi! Thank you very much for pointing that out.
That is absolutely true. You got it right.

It escaped my thoughts, because it's a very rare situation.
I already checked the dictionary and it only happens with about a dozen words.

A list of about 80% of the words that will have that problem:
macabre, macaroni, macadamia, mace, Macedonian, machine[ry], macho, macro[...] .
Fortunately, those are not words very common in songs, albums or artist names.

I will try to fix it as soon as possible, but I'm just about to go to sleep (it's past 4. am here! eheh).
I already have v2.2 ready, but now I will try to integrate this change.
I'm in the process of rebuilding my main Actions so I'm not sure when I'll upload this, but until the end of the week I expect to do so.

Meanwhile, have some good tagging.

And if you find any other weird/buggy situation, please let me know.

the verb am (I Am Alive) is assumed to be the time descriptor AM and changed to all caps. Usually this wont be a problem because most labels will be contracted to "I'm" but it is something to consider.

So i found that if the last word of the title is in the list of things you change (in with it) it will change it to lowercase. "Jump in" instead of "Jump In" it just looked really weird to me.

I looked up the rules on title case (the case you seem to be going for) and found this:

-Capitalize the principal words, including prepositions and conjunctions of four or more letters.
-Capitalize an article--the, a, an--or words of fewer than four letters if it is the first or last word in a title.

they also state that some people use 5 letters instead of 4.

my point: the last word should be capital no matter what it is.

keep up the good work. more people will get use of this than you think.

edit: did some more poking and this might help you out a bit:

cjl214,
thank you very much for all your remarks.

They are really up to the point, and correct, all of them. This is exactly the kind of feedback that I needed.
The AM situation is really my fault. I should have noticed that one. Shame on me!

Unfortunately I haven't yet finished what I need, in order to get back to these Actions, and so I'm not going to be able to do it right now, as I intended. I'm sorry.

But I haven't forgot your posts.

So, as soon as I can, I will get this fixed (or at least I will try) eheheh. May be some days, or some weeks...

And please, continue to report bugs or weird situations, if you find them.

So i found that if the last word of the title is in the list of things you change (in with it) it will change it to lowercase. "Jump in" instead of "Jump In" it just looked really weird to me.

my point: the last word should be capital no matter what it is.

Hi everyone.
I finally managed to find some time for these actions and to attend these pertinent remarks.

cjl214,
I already followed the link you supplied (which lead to another thread here).
They were very insightful.
But I'm not entirely convinced always Uppercasing the last words is a good decision
and this is the reason of this post.

Actually, what you (and other people on the links/threads that you showed)
is considering is a particular situation based on its actual grammar meaning and not typographical meaning, because it has to do with phrasal verbs.
I only intend to do typographical changes, not grammar changes, because it would be an entirely completely different matter and impossible to achieve with a simple scripting language in Mp3Tag.
In fact, a full understanding of grammar is not even available in some of the most advanced software in the world!
(Google Translator, for instance, is far from perfect, precisely because it lacks good "grammar skills").

Anyone who has ever studied English language knows about phrasal verbs.
"Jump in" is just an example of that. "Get out" is another example, perhaps one of the most common of all.
For someone who doesn't know what a phrasal verb is, let's simplify it by saying they are essentially an expression that contains a verb and a preposition (e.g. verb=Jump, preposition=in).
For a detailed explanation, please check here: http://en.wikipedia.org/wiki/Phrasal_verb

So, prepositions such as: on, in, out, on are commonly used as part of phrasal verbs and not always as single prepositions.
When they are used as phrasal verbs it would make more sense to uppercase them, but unfortunately that would require grammar analysis, so it's out of question.

"Jump in" just like that, according to the proposed rule of always uppercasing the last word,
means that it should formatted as: "Jump In".
Which means that it was uppercased it, but not based on the fact that it is a minor word (preposition, in this case), rather on the fact that it is part of a phrasal verb, in a case in which it is easy to detect (it's the last word).

However, if the track (sentence) changes to: "Jump in and come here", then the word "in" will not be uppercased, because it is not at the end of the sentence. Although it still is a preposition and part of the same exact phrasal verb, it is not the last word of the sentence, and so it's not easily detected as a phrasal verb, so it will not be treated as such.
I think this raises an even more serious problem: consistency!
Because in this case, the same exact word and expression will be formatted in different ways.

How to always solve this in a consistent manner?
Only with grammar analysis, which is out of question as I mentioned earlier.

So, the real question here, for this Action's sake, is:
Should I allow this inconsistency to appropriately handle a very particular case of phrasal verb?
I am inclined to say "no", because I think the number of inconsistencies will be far greater
than the number of situations it solves.

Perhaps I should remove the prepositions that might appear on phrasal verbs (in, on, by, etc)
from the list of minor words, so that they will never be lowercased.

Perhaps this is what makes more sense, but I'm not sure about this one.
This is a matter in which I would love to have some feedback from other users and minds.

Thanks for bringing this interesting case into discussion.

I'm adding this reply so that people on this thread is notified of this update, to version 3.1.

It has a huge change in the technique used in the development, making the code simpler to understand and maintain, in case someone wants to add/remove their own words.

I tested this version more thoroughly and found no unexpected behaviour.
Happy formatting.