I need to rename my entire library from the current format (see attached) to Artist - Title
Eliminating numbers, underscores, special characters, etc. Is this possible to do with mp3 tag? If so, how?
Thanks in advance 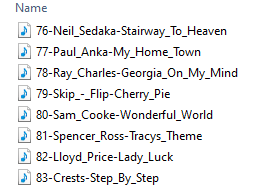 First step: Import the existing parts from your filenames into the tags:

How to import parts of the filename into the tag? Importing tags for filenames and directory names can be done by using the [Converter > Filename - Tag] Converter > Filename - Tag. The basic concept is the notion of a format string which describes the structure of the name to import from. The format string is built of either standard text (e.g., Music), placeholders (such as %artist%, %title%, ...), or backslash characters \ that denote directory structures. Here is an example that imports tag…

Second step: Rename your files with the imported parts in your tags ARTIST and TITLE:

How to rename files based on tags? Renaming files, creating folders and complete directory structures from tags can be done by using the [:mt_ttf:] Converter > Tag - Filename with a format string. A format string is used to describe the structure of the desired filename. Besides using normal placeholders (such as %artist%, %title%, ...) and arbitrary text (e.g., Music) it also allows for separating folders with the backslash \ character. Here is an example that renames the file based on the ta…

That in your screendump are most likely not the song titles but the filenames.
Filenames are properties for the underlying operating system. MP3tag deals with embedded metadata (and so do most players).
Just to make that clear and that there is no misunderstanding.