Action for Folders to All tags

All of my folders are well organized. I would like to be able to use the Actions to compete some steps to get most of the tags filled in. I am able to make Actions for most of the steps, but I am having a hard time trying to get the Genre and the Year from the Folder. I have a really big collection, and this would save a lot of time if I could just create one action and not have to rely on doing multiple steps. My folder structure is :

You could use the Convert Filename -> Tag to check if this works before you use it in an action:
Format-String for your folder:
%Genre%\%Artist%\[%Year%]\%Album%\%Title% 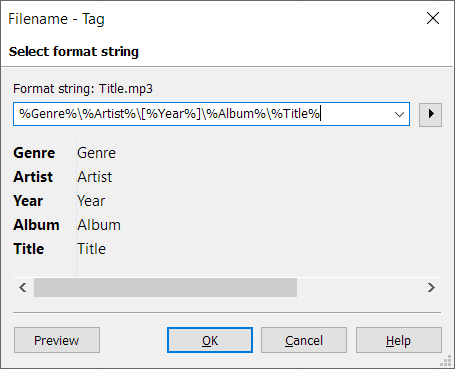 If the tag names in the preview are written in bold, they are recognized as official tag.
If they are not bold, there is a typo somehwere in your format string.

If this works, I would append the year in a second step to the existing album name. 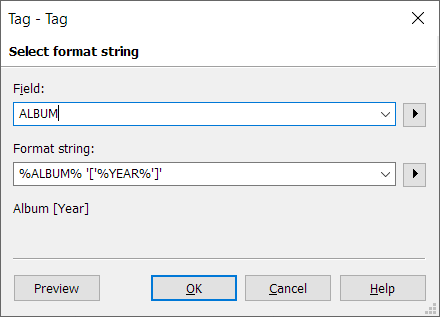 Format-String for Year in brackets after existing Albumname:
%ALBUM% '['%YEAR%']'

Thanks for the fast reply.....I can get the right information when doing Filename to tag with: All the information is BOLD.

But I want to use this as an Action or multiple Actions to accomplish this. I can get the Artist, Album and Title to the appropriate tags from the Folders, but I am having a hard time adding "Genre" and "Year" from the folders to their respective folders. I would like to do this in Action if it is possible. I have a large music collection, and I already have some pretty extensive built Actions.

For tags you don't want to fill (like TITLE) you can replace the part in the guessing pattern with %dummy% like this
D:\Music\%Genre%\%Artist%\[%Year%]\%Album%\%dummy%

but I am having a hard time adding "Genre" and "Year" from the folders to their respective folders.

Actions only work with a fixed directory structure. If the structure changes, you have to change the action (the guessing pattern) too.

Honestly, how often in the life of a file does this happen?
I can imagine that it happens once when one realizes that embedded metadata is better than external data in paths. But afterwards? I would assume that from then on all further manipulation happens in the tags and that, the other way round, the filled tags in the end lead to a folder structure.
But, if it should happen that files from other sources diffundate into the collection, then I would assume that an ad hoc Converter pattern would serve the purpose much better than a fixed action.
Since a couple of versions ago, the handling of Converter patterns has been improved so that such pattern can be saved, named, get comments (and deleted) if necessary, almost like actions, only with the benefit of getting the preview which the actions lack.

So, even though it is possible to emulate the function of Convert>Filename-Tag with an action of the type "Guess value" to import tag fields, I would assume, that the converter can be managed better.