When editing a format string, in rare cases you are not given the actual string to start with, but an old string from the string history. I noticed this when I accidentally used uppercase, but I'm not sure if this issue is limited to uppercase/lowercase.

To reproduce, do the following

Also, I wonder - does the edit string come from the history? Shouldn't it come from the saved Action? I mean, you normally have much more complex format strings than in my example above, and any history error would not be so easy to notice. 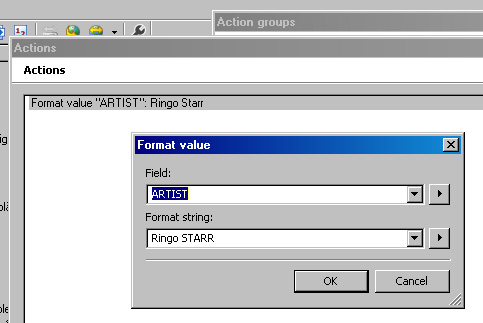 Thanks for reporting! I guess I've found the issue and will fix it to the next release.

And you've guessed correctly: it's related to uppercase/lowercase and happens only to those strings.

I've fixed this with Mp3tag v2.93a. Thanks again for reporting!

Thanks for the fix! I've tested and it's probably working as intended now. However, there's still a little trap:

To avoid this I suggest an option to disable the history. Or perhaps a possibility to edit and lock the history to only keep valid strings and get rid of faulty strings and "testing junk strings" that have a tendency to build up.

But if you delete Ringo Starr and miss to delete Ringo STARR, the latter will still be the proposed string when you edit. I think this is unfortunate, as running an Action can affect so much of your music library.

I currently don't want to increase complexity by adding even more options. You can disable auto-completion at "Options > General" which should do the trick.

You can disable auto-completion at "Options > General" which should do the trick.

Yes, but I do like the auto-completion at other places. Choices...