sorry to bother you again, but I guess I really in love now with this nice and handy little application

I have two questions:

a.) Is it possible to set up an action that does two things in a row?

structure is of course like that:
artist1
__album1
____tracks

b.) is it possible to bulk remove all special character out of the album tag fiels like : \ / * etc.?

If you want to rename the 2 parts of a folder, I would again suggest the absolute path instead of a relative one.
So, use the action you have already created but enter as
Format String: e:\music\%artist%\%album%

You can encapsulate the format string in the function $validate() that removes any illegal character from the path:

You see that the \ is still a valid character, just as the / is.
So if you want to get rid of these as well, it is a little more complicated:

The * will be removed by the $validate() function.

wow, that was quick - and again you ohrenkino

thank you so much!

its working liek a charm

according to a.)
is it possible to do a lookup first if the folder has already the exact name as the artist then skip the rewriting process?

..why I am asking, because this process overall really takes time.....

Then I would apply a filter first, something like: 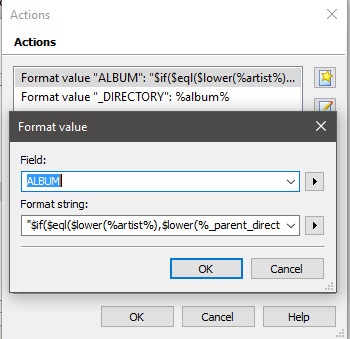 and sorry, I ment lookup against the folder of the album..

You can filter for files: you find the input box for filter criteria usually at the bottom of the MP3tag window. If it is not there, press F3 to show it (or press F3 again if you have just hidden the filter input box).

Enter the filter criteria there and you see only the files where the criteria match.

If you want to look up the album name then - if I understood your structure correctly - you do not refer to the parent directory but to the (current) directory. So the filter should be:

found it, thank you - and yes I am studying now the manual section before bothering again

@developers: it would come handy to add some "live" examples to each chapter of the manuals.

confirming that the filter is working fine!