Many thanks again to ohrenkino and LyricsLover for their help sorting an issue for me yesterday.
Today I have more problems ...
I have a Camebridge Audio CXN (V2) network player and I am trying to play album files controlled by their free Android phone app. I'm loading my albums (mainly FLAC filles) onto a USB hard drive using the recommended library structure. I'm using MP3TAG to check and occasionally re-organize the metadata in the album files. Initially things were going well and I managed to get 5 albums loaded to the HDD plugged it into the Camebridge player and everything worked perfectly from the Android app. Most of the albums have embedded album art in the files and everything loads, displays and plays perfectly. I have managed to pull in cover artwork from various sources for some albums and add it to the files without issue. But ... I have a Joni Mitchell folder with 2 separate sub folders containing the tracks for 2 of her albums ... Hejira and Wild Things Run Fast. I have attempted to provide cover art jpgs for both albums. Everything seems to look correct in MP3TAG (but obviously it's not). The albums can be found and displayed on the app ... tracks play in the correct sequence ... but no cover art for the albums or the individual tracks. What am I doing wrong? 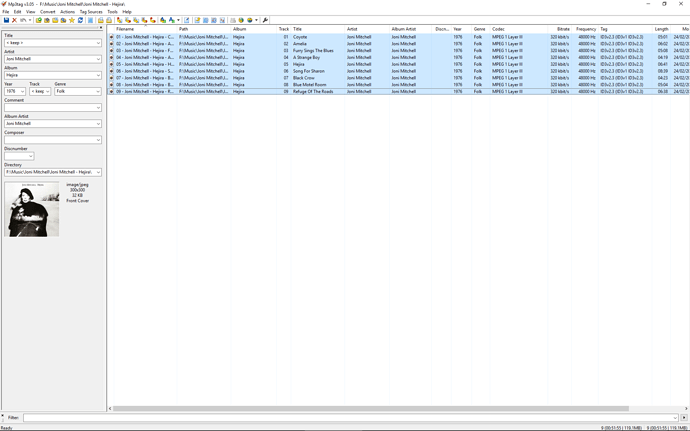 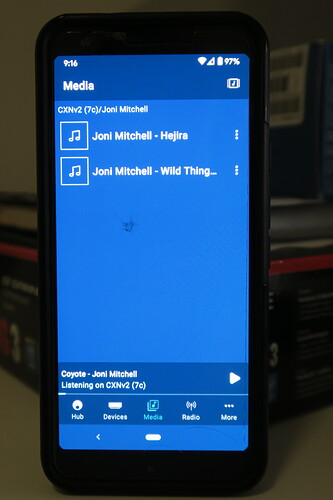 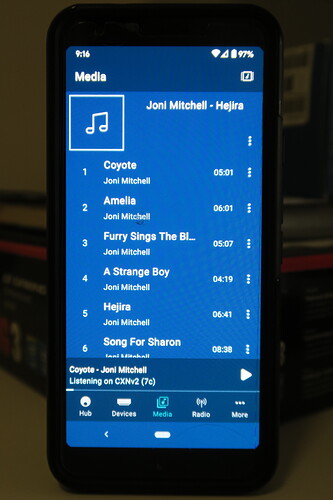 Does the player use its own database or image cache? If so, empty it.

I don't think so ... my understanding (limited at best) is that it just "reads" what's on a drive or usb stick that can be plugged into the front cabinet. It just "sees" the files as media and plays stuff ... ?? But it's main purpose is as a network streamer so when it's connected to say a NAS drive/music server via the home router/cat5 network cable it communicates via UPNP protocol ... the server (which does most of the crunching) creates/maintains the database. I could be way off course with this though. I've had a poke around and there does not seem to be any evidence of an on-board database or cache with the streamer. And if there was I would not know the first thing about how to clear it.

Did the other files have the embedded artwork when you first read them with the player so that the player noticed the cover when if first encountered these files?

Does the player need some kind of update trigger?

Not that I am aware of ... I am able to play the other albums on the USB HDD ... stop/start ... swap to another album ... no problems (controlled by the app over wifi).

What happens if you rename the Joni Mitchell files just a little so that they appear to be new files and then add them to the player?

I have not tried this but will give it a try ... if I get desperate

Does the player need some kind of external file (e.g. WMP likes folder.jpg in each folder)?

I don't think so ... I haven't done that with the files/folders that are working OK ... it seems to be happy with anything that has a jpg extension ... ??

I asked the questions so that you can look into it locally.
I don't have your setup and I don't want to replicate it.
In fact, it all boils down to the single question: what is the difference between the files that work and those that don't.
So have a look and compare them.
And as you have to try a number of things (like renaming and adding files to the folder, finding the cache, the update mechanism) it would be best if you could definitely rule out these influences or score a hit.

...Absolutely ... time is against me at the moment ... juggling family commitments ... will get back.
Cheers.

There are players that can't show progressive jpgs. Maybe these not working covers are progressive jpgs. Try if replacing these covers with baseline jpgs solves the problem.
https://medium.com/hd-pro/jpeg-formats-progressive-vs-baseline-73b3938c2339

Thank you for that additional hint.
Going further on that: it is possible to transform such covers with the action to adjust covers by transforming jpg files to png (and back if you wish).

Thanks for this poster and apologies for taking so much time to get back ... turns out I've been using baseline jpgs.

Thanks again ohrenkino and apologies for taking so much time getting back. I have investigated all of your suggestions and the problem seems to be rectified. It turns out that Camebridge network players need embedded artwork jpgs in the files when being used with UPNP servers. Although I am not currently using it that way I am embedding the files as I plan to use a server in the future. As you suggested, I had omitted to include the album art jpg inside the folder containing the album music files (which is a requirement of the Camebridge players when accessing files via USB). All is good now that I have done so. It doesn't seem to matter how the jpg is named ... as long as it has the jpg extension. Interestingly, and possibly why it didn't occur to me initially, I have several albums on the drive that don't have the jpg inside the album music folder and the album art is still displayed!? - So something else is going on.

It turns out that Camebridge network players need embedded artwork jpgs in the files when being used with UPNP servers. Although I am not currently using it that way I am embedding the files as I plan to use a server in the future.

In either case (UPnP or USB) it should be as simple as putting a single cover in the album folder - no need for embedded art in each and every file.

n either case (UPnP or USB) it should be as simple as putting a single cover in the album folder - no need for embedded art in each and every file.

Thanks for your input vilsen ... easy enough to test I suppose ... I'll try that approach with the next album that I add to the music library and see what happens.