How to match music tracks into respective albums? Currently, only showing individual tracks on MP3TAG, even on SSD storage drive, and all music players. After trying to batch load metadata, all tracks were separated from their album folders. How do I get 10's of thousands of tracks back into their respective album folders? Advice and suggestions for this first time MP3Tag user...

Do you have any of these files with album, track, and disc numbers already? What about in the filenames? A screenshot of your main screen, and at least one file with all metadata (use Alt-T) would be helpful here.

After trying to batch load metadata, all tracks were separated from their album folders

How did you load the metadata?
MP3tag does not move files in the folder structure unless you tell it to do so.
So please describe your workflow with reference to which function you used in MP3tag.

As a first time user, I only used Tag Sources and Actions. Then, when I opened MusicBee and the SSD drive used only for music files, the tracks were no longer contained within the album folders. Folders and files were now separated. I've attached two screen shots: #1 shows the empty Album column, while #2 shows where I corrected an album one track at a time. I could "highlight" all the tracks from one album, but that will still incur much work. 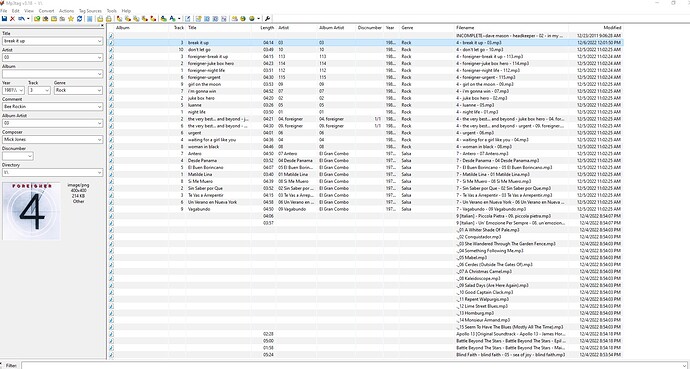 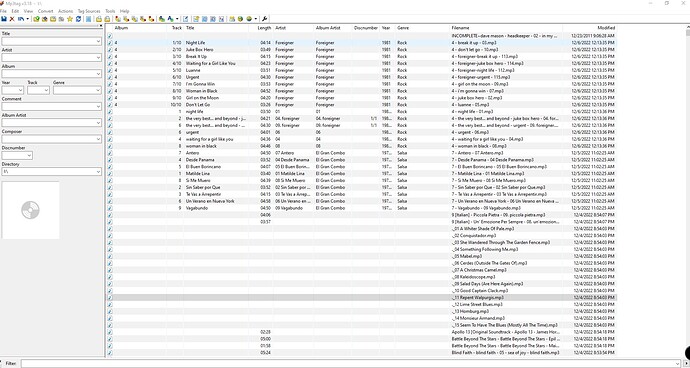 I stay with my opinion that MP3tag does not move any files to other folders simply by tagging.
So, yes, it could be that you have to enter all the data for each file. Or try to retrieve data from the path data - if that is available.
And as you said

I only used Tag Sources and Actions

but you do not say which actions, it could be that these actions led to the problems.

The first question is - Do you have a backup of your original files that were organized as you wanted them? This would be the best place to start if that is an option.

If not, you will have some serious work to do here. Some of these look like they may have more info than others, at least in the filename details. Many of them don't seem to have any metadata at all, so these are going to be very challenging to automate with an action.

Unfortunately none of these examples are consistently the same, so you will first have to try to break these down into groups of similarly constructed names. Then you can use the Converter>Filename-Tag to extract this info. Once you have built out the basic fields, you can them use these to rebuild your directory folder structure and move these files to where you want them.

What I just noticed: you also have APE tags in the files.
Could it be that you have some of the vital information in those tags but you don't read them - or the other way round: you have hardly any data in the APE tags but read them?
See Tools>Options>Tags>Mpeg for these settings.

Good thought, MotleyG. Instead of messing around too much, I'm restoring the full backup of the Music SSD. It's the only files on it, and much easier. I'll spend my time learning MP3Tag on new acquisitions (single songs/albums) at a time.
I still would like to learn how to perform "batch" procedures, as this was one of the elements that drew me to this software. TY

Once you have your music library folder restored, let’s take another look at a screenshot of those files and see if you have something more solid to work with.

I still would like to learn how to perform "batch" procedures, as this was one of the elements that drew me to this software

You can highlight a single track in the list to edit quickly in the tag panel. You can also highlight many tracks (using Ctrl or Shift like in most other programs) and still do quick edits that apply to all in the panel.

But I strongly recommend that you use the Filter feature to first find only the files that should apply to what you wish to do. This can be for just one Album or Albumartist as an example. Perhaps you have some with different spellings like Beatles, The Beatles, or The Beetles that all needs to be addressed. The filter is the most powerful tool here, all other actions can be applied at this point and help to get your library looking the way you want it.

The screendumps show a couple of files without length.
Usually, this indicates that the file is corrupt.
I would check the files first for integrity before I would invest any more tagging effort.