Audio channels in a track?

just wondering - is there any way to get the number of tracks in a video file such as mp4 or mkv?

Do you ask for the number of choosable language tracks in a video file? Something like 1 x english, 1 x german, 1 x klingon?

Or do you think about a youtube video including the top 20 songs?

Ah - I think I used the wrong word. I mean how many channels in a track - apologies for the confusion.

So I am after telling if a movie is Mono - stereo - 6 channel surround etc.

I have created a tag source that hits IMDB and pulls the movie description down and puts it in the comment so I can see what the movies are directly from the file listing. I would love to do something like that with the number of channels.

Edit - updated question title to reflect what I am really after.

You could try the placeholder
%_mode%
But I'm not sure if this is enough to telling you if it is Mono or Stereo oder something else.

Thanks for taking the time to reply but %_mode% does not do it. It is not even very good at telling mono from stereo. Plus if the tracks are 2 or more it just gives a mode of 2.

%_mode% should report the number of channels in the first or default track for both MP4 and MKV. Can you check the number of tracks (not channels!) in the file and see if the first track really has more than two channels?

Wow - the MP3 tagging god himself - I am honoured...(awesome program BTW).

I have checked multiple files. (mkv and mp4). All have only one track and most are surround (6 channels). This is confirmed both with MediaAreaNet/MediaInfo program and the indicators on my surround amp (that and I suppose they do have surround tracks when I listen to them).

I have also written a quick powershell script to run through the media folder that reads tags so I am pretty convinced that there are 6 channels in most of the files (again - only one one track per file).

As mentioned %_mode% never gives anything more than 2 no matter the number of channels per track or the type of file.

Any other ideas would be appreciated.

Thanks for taking the time to look at this
Everso

Bit of an update. After being told that %_mode% should show the channels I began to suspect my installation. I have uninstalled/reinstalled MP3TAG with some strange results. I am now seeing some differences but it's far from right. The attached image shows a sample where "Track" is the confirmed number of channels and Mode is - well what Mode shows. As you can see - some of them are right but half of them are showing "2" instead of "6". 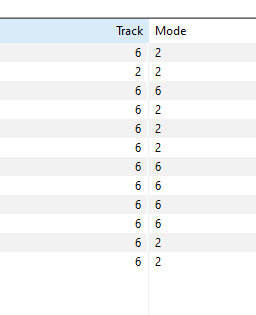 Is the discrepancy happening with MP4 or MKA or both?

It's both MKV and MP4... However I have done some more digging about and thing I know the issue (though not the solution yet). It looks like the audio codec (I think this is the correct term). If the track is AC3 or DTS (not tested any others) then it will report a mode of 2 no matter what. However if the codec is AAC then mode reports correctly.

To confirm this I took one of the incorrectly reporting files and re-coded it to AAC and BOOM ... mode reports correct number of channels.

I hope this helps pin down the issue and maybe a solution. If it's something that cannot be sorted I can re-code my files.

This should be fixed with Mp3tag v3.09 — can you please re-check your files?

thanks for looking at this but I am afraid it's made no difference.

I've made changes regarding MP4 with AC3. Can you re-check those?

Is there a new version "3.9.1?". I did check the download page and the file is the same version and file size. Am I missing something?

No, I was referring to your screenshot which shows MPEG-4 AAC and not MPEG-4 AC3. In your original post you've mentioned

If the track is AC3 or DTS (not tested any others) then it will report a mode of 2 no matter what.

I couldn't reproduce with DTS, but could with AC3 — that's why I've mentioned that. Maybe you can point me to files that show this unintended behavior and I can invest some time and research to see where it's going wrong.