What do I have to do to get Album Artist permanently changed in .wav's?

Please note that the proper fieldname is ALBUMARTIST (no blank in the middle).

Thanks for the info.

can you enter anything for album artist in the wav files, using one of the named programs?
(I mean: WMP does not display the composer, even though the field is filled properly...)
If you get data into the field that is displayed by these 2 programs, perhaps the extended tags dialogue reveals where they would like to have the information.

I suspect the problem hinges on how one field is handled. 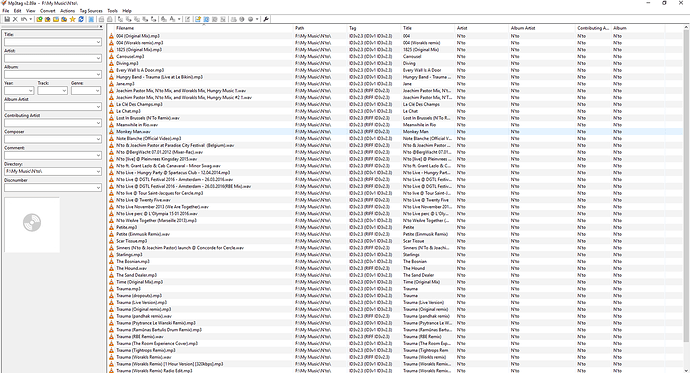 There is a similar situation with the comment field in FLAC files. It also is not shown in File Explorer.
But maybe nothing is broken: it could be that things are as intended, but not as we want.
Microsoft is not known for excellent metadata handling.

No audio tagger or player supports every tag field for all file types.
And there is no guarantee that any 2 applications will handle metadata exactly the same for any particular file type.
The world of metadata is a messy place: there are often discussions and arguments about what is "correct" and/or acceptable.

Another example: for WV files, Mp3tag and Winamp (with a plug-in) read and write APE tags, but File Explorer does neither.

Windows Explorer does not show albumartist in its defined column and it does not matter wether it is correctly called ALBUMARTIST or as in you case ALBUM ARTIST.
Other programs like MediaInfo (https://mediaarea.net/de/MediaInfo) show the albumartist that is written by Mp3Tag. If a wave-file contains albumartist (written by MP3Tag) it also says that there are 2 tags with the same content (Album/Performer and Director).

I somehow doubt that your player is able to read wave-tags at all.
Do you have a wave-file that is correctly handled by your player?
If so you should load it and inspect it with Mp3Tag in the extedend tag-view (press ALT+t) and look which fieldname is shown.

Anyway you should correct the ALBUM ARTIST to ALBUMARTIST, if the tag is really "Album Artist". In Mp3Tag you have to distinguish between the tag-name to be shown in Mp3Tag and the fieldname. In the tag-panel and the columns you can define these different. Perhaps your shown "Album Artist" in the columns and the tag-panel are only the names to be shown and the defined field-name in reality is ALBUMARTIST. The extended tag-view always shows the fieldname, so you can check this by pressing ALT+t

At this point, two out of three listing/apps remain clueless about Album Artist(*): File Explorer (FE) and Player Pro app (PP). Power Player (P_P) app recognizes the Album Artist Mp3tag displays. The problem appears to hinge on how FE and PP handle the data. If only FE can't display it, I'd be willing to accept that maybe Microsoft made a mistake. I'm not 100% sold on that idea, though. Because an Android app has the same problem suggests that either both FE and PP simply don't know about the field in .wav. Or there's an alternate definition. If so, is there a way to get Mp3tag to address that?

(*) The words "Album Artist" refer only to list headers. AFAIK, I haven't tinkered with ALBUMARTIST as ALBUM ARTIST. In fact, I haven't a clue about how I'd do that. In short, I'm using Mp3tag's default value for the field. How do I verify what Mp3tag is using for this field?

How do I verify what Mp3tag is using for this field?

Right-click on any header of a column in the files list, open the Columns dialogue.
Navigate to the entry for Album Artist, check the settings for "field" and "value". Both should read %albumartist%.

If so, is there a way to get Mp3tag to address that?

I think, that this has been answered by @poster and @ryerman (and me):
Select one of the files with your applications (probably FE),
try to enter anything in the field for album artist and save it.
Verify with the program (FE) that the field is really filled, even if you re-read the data.
Now open that file in MP3tag, select it, press Alt-T to open the extended tags dialogue and see if you find that what you have just entered as album artist. The field name should be displayed next to the data.

Enough is enough. I now agree Microsoft has its unique notions about .wav fields. PlayerPro seems to have unique and limited ideas about .wav fields. PowerPlayer seems to be more in line with Mp3tag. I need to run down those issues in the respective forums. FWIW Album Artist uses %albumartist% save as the Name which AFAIK is cosmetic.

Thanks for the effort and patience!