Does MP3Tag maintains a memory of previous data? I'll try to explain why.
I've created a field : Recorded Format, which shows where i got the music from. In this case: For some reason when I update the field it it saves as Itunesmusic. If you save it again. It saves as Itunesmusicmusic, etc.

The other instant s usi the word Four Tops, The. When I update the album it saves as

It's as if it has seen this name before and tries to duplicate it..

It seems only these two that are effected.

Anywhere I should check in my actions.

A plain answer to the initial question

Does MP3Tag maintains a memory of previous data?

is: no.
MP3tag only uses the data that is already there or that the user tells MP3tag to add.
So to narrow down the cause for the behaviour:

Which program shows the duplicate data?
How do you enter that data? Do you use e.g. an action?
What kind of files are we talking about?
(If these are MP3 files, use a tool to check the integrity of the file. I suspect that all along the editing of the file some kind of corruption occurred or an action adds data and you simply forgot that there is this action. All this is some kind of lame attempt to simulate a look over your shoulder.)

Thanks... The program is MP3 Tag. something in my actions has it when you see ITunes change to ItunesMusic, and repeat everytime the folder is updated.

I thought I would change it to apple, but it changes it to AppleMusic, and keeps repeating if you update the album. But if you give it an odd name 7, Google, 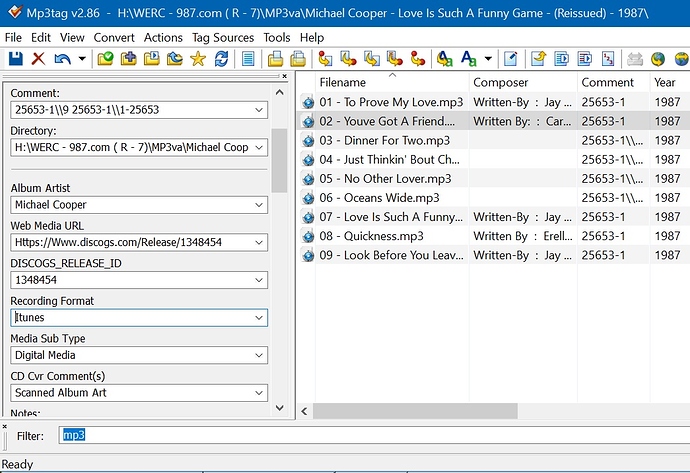 Here are a few examples.

I can see that apparently
Itunes
becomes
ItuneMusicMusics
So there is an extra S at the end, probably a leftover from "Itunes".
You have to check your actions where you have a "Format value" action that keeps the former data but replaces it.
The screendumps show the final result but not how you got there.