Error when I open mp3tag

I don't know why I can't use the application... Any idea?

Perhaps the user account with which you installed the program is not the one with which you run it
Or you had a previous installation and the mp3tag.cfg file is corrupt - what happens if you rename it?

The crash happens somewhere out of the Mp3tag code base, so it's unlikely that it's related to your user account or configuration.

Do you see anything in the Mp3tagError.log from %APPDATA%\Mp3tag\ after the crash? Did it work before and now it don't or is it the first time using Mp3tag?

Yesterday I installed it . It works perfectly... But When I tried to open today didn´t work . I can open and it works if I don't touch anything. After that a error message window is open 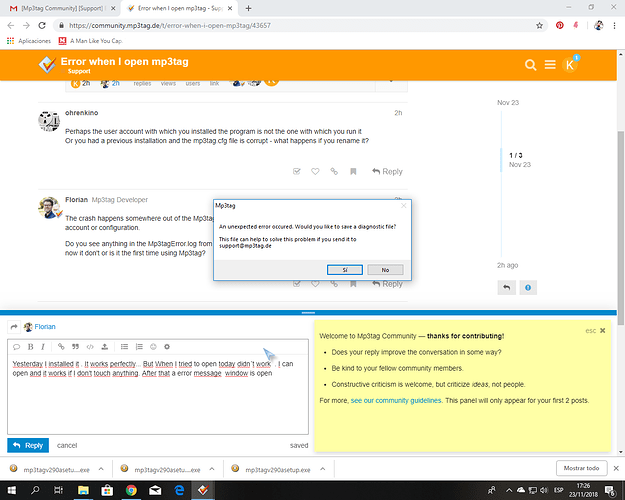 Okay , I install and unistall 10 times . diferent versions , same error, I think something is wrong with my computer. I'm so frustated

You can send another crash dump and I'll try if it reveals something different that the first one.

And: did you install something else or changed something in your Windows in between the day it worked and the day it didn't anymore?

mmm nope. But the the light went away while I was using the computer. And I think the app was opened

It's no different from the other crash dump, except that you seem to be using v2.87a now. Sorry, I can't identify the issue here.

But the the light went away while I was using the computer. And I think the app was opened

After such an incident I would always check the file system integrity, e.g. with an administrator command shell and the command
chkdsk c: /v /f
and repeat that for all internal drives.
It may be necessary to boot the system to start the repair process.

I solved the problem! well... I just reboot the system and it works!