So that - if a subset of items in the File View are selected (which selection is shown with color highlighting - if cursor focus shifts to tag panel, etc, the color remains constant. Right now, if the focus shifts to a tag panel field, the color of the selected items in the File View becomes gray. The issue is that the alternate line coloring is also gray. This can result visually in the appearance of the selection being different than it actually is, which soft of defeats the purpose in using color to show the selection. Just keep the color constant no matter where the focus is. Thanks.

Have you played around with Tools>Options>General>Show line colouring?

Thanks for the prompt reply! Since it's you, let say what a terrific bit of software you've given us. By far the best of it's kind (just found out I could use Format to move files to new directories based on tags; in my case by genre/album, my preferred organization).

I'm on a MS Surface Laptop, Win10Pro. I have version 3.14 from March, 2022 and there is no such option (see screencap below). I did not do a full system-wide install but chose the Portable setup (because I also use mp3tag on my Kubuntu 20.04 desktop under Wine which works very well if one does a Portable install on a Window box, then copies the files over -- just runs and works for the most part). 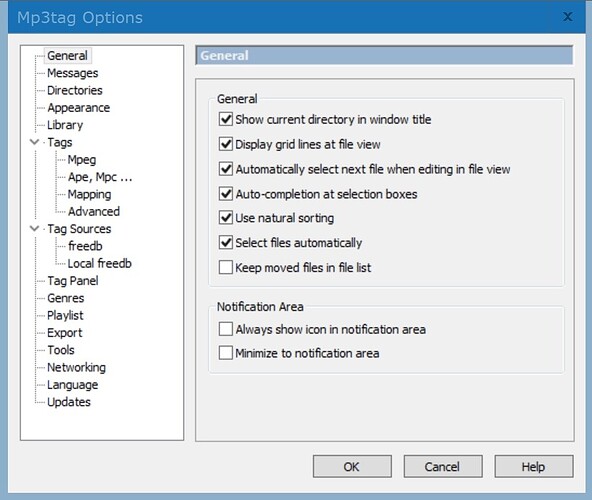 Thanks for the prompt reply! Since it's you, let say what a terrific bit of software you've given us.

Just a little(?) correction: the "you" should be replaced with @Florian . I am just a participant in the forum.

The option I meant (thank you for the screendump) is the second from tht top:
"Display grid lines at file view".
It's a 3-state-switch which gives you 3 kinds of appearences.

Ah! Thanks for the correction. And thanks @Florian!!

It's a 3-state-switch which gives you 3 kinds of appearences.

I had no idea this was 3-state! I guess You really can teach an old dog new tricks!