Filename to show title only

Sorry I am a nub on this and have tried to read the Faqs. I apologize for asking, hopefully someone can simplify this for me.

The first issue I had I was able to resolve. Do not remember how I did it. The filename had numbers before the song titles. I was able to do a mass cleanup and remove them all. Now when I put all the songs in my Android I get the group names before the song title. That is how it is shown in the folders on my desktop as well. In Itunes for my ipod it seems to be fine.

A few questions.
#1 Fix this

2- How do I avoid in the future when I do a new tag to not get the numbers in front of the filename or the group. I never had before seems to be anew issue with me. Hoping its a simple thing 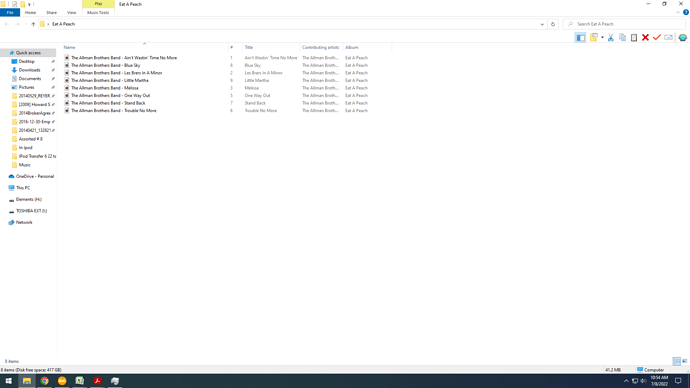 Just to get this clear:
filenames are no embedded metadata like tags.

Which means that tagging and renaming files are completely different things.
So what does your Android player display? The filename? The embedded tags?

If I look at the 3rd screenshot it looks to me as though you have filled the tag fields for ARTIST, ALBUM, TITLE and TRACK.
From these you can easily rename your files.
If your player really uses the filename to sort the files, and you don't want to get all the tracks from all albums and artists starting with "1" first, then the no. 2s and so on, then I would suggest that you rename the files with
Converter > Tag-Filename
Format string: %artist%_%album%_$num(%track%2,)_%title%

Like that you keep the filenames so that the artists are shown alphabetical, then their albums and finally the tracks on the album starting with "1" down to the last of that album.

Renaming files is always a separate step that has to be triggered by the user and does not happen automatically.

Thanks, so I never did that on the third screen shot, at least I do not think I did. That happened after I used a string to remove the numbers in screen shot 1. I know I can go into each folder manually and fix this but I have way to many songs so it will take a long time. In the ipod it seems perfect as is. On my PC and Android is where the file name gives the group name as well. It is fine if that is what it is. It plays on the player properly its more how its listed like in screenie 2

How do I do a massive fix in the filename and just have the song titles? 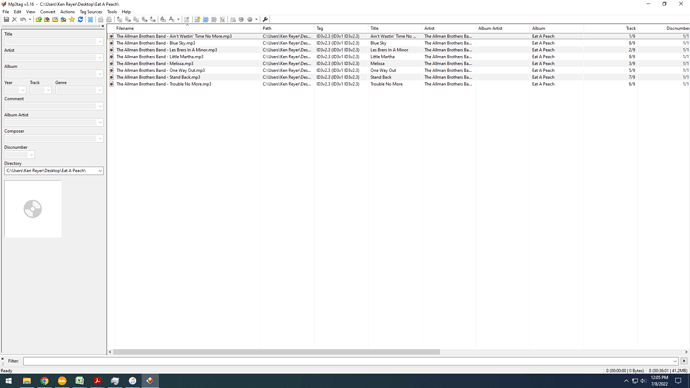 Provided, you have filled the tag field TITLE ...
load all the files
select them all
Use Converter>Tag-Filename Alt-1
Enter as format string: %title%
Click OK.

You rule, thanks so much it was that easy.

Not that it truly matters, but is there a reason you wanted to remove the track numbers from your file names? It only matters when browsing by folder/filename, but these keep the tracks in "order" within the album folder. And for multi-disc albums it is usually added before the track, like this;
%disc%-%track% %albumartist% - %title%
(although I personally do not include the Artist or AlbumArtist in my naming)

The metadata tag fields are far more important, as that is what all good players use to build their browsing libraries from. The file names become irrelevant at that point other than for personal reference.

Because it was coming up on the ipod like 01- Bertha as the title when playing. I just do a shuffle on my 7k songs most of time. Also hated the way it looked. Maybe I did it wrong, not sure.

All IOS devices - iPods, iPhones, AppleTV, and of course iTunes - use metadata info first if found, then default to file names if there is no metadata. You can use the folder and filename convention mentioned earlier, just make sure the field for TITLE has no track number and your iPod should behave.

Thank you. appreciate it