I have been using MP3tag for years it seems now. I love it.
But is it properly tagging my music files ? I would think so since everything on my PC seems fine. Media players play them correctly as well as, most importantly, display them correctly.
I can open the entire album in WinAmp and have it on album view (art work) and I see nothing wrong.

Now comes the issue. If I transfer my files to an SD card to play on my Android tablet, there are many issues. Album art not showing up for some files. Tablet says album has 11 songs, but only display and allow me to play 5 of them as if the others are not fully tagged right.
If I use another player, say WinAmp for Android, I can play all songs no problem, but no album art.

Another issue I saw on the tablet was before I started messing with an albums tags, I had the entire album on there and 4 would be displayed by the album cover, then in a separate but same album cover, the remaining songs were listed. So I had what seemed to be the album split up.

I'd like some help in trying to figure this out.

... on my Android tablet... then in a separate but same album cover...

I'd like some help in trying to figure this out.

Several checks:
First, try to find out what kind of tag versions are used by your tablet player.
Then check if these tags are filled in your files. E.g. if you have only V2.3 tags but your player expects V1 tags you have to write them too > see Options Mpeg for this.
BTW: if you find any APE tags - remove them.

Then: the classical split of an album usually comes from the lack of information in the tag %albumartist%. You can usually simply copy the contents of %artist% into %albumartist% to get the correct grouping. (see FAQs for that).

Here are my settings. I think they are fine, no ?
I will have to see about my tablet settings for this though. I can say I am using the WinAmp app though as I do not like the default player. But will assume it doesn't matter as I need to find something in the tablet itself that looks at tags ?

Here are my settings. I think they are fine, no ?

I can't see the settings - please upload them to this server. Or don't.
Check that you have disabled read and write for APE, but enabled "delete" for APE.
Then cut and paste the tags with the functions of the file list context menu.
What about the data in the albumartist tag?

I added photos ... hmm. Here it is again. But I think they are as you suggested. 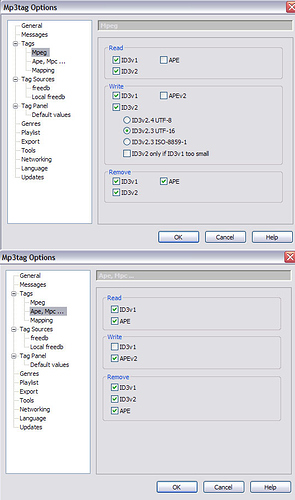 I added photos ... hmm. Here it is again. But I think they are as you suggested. 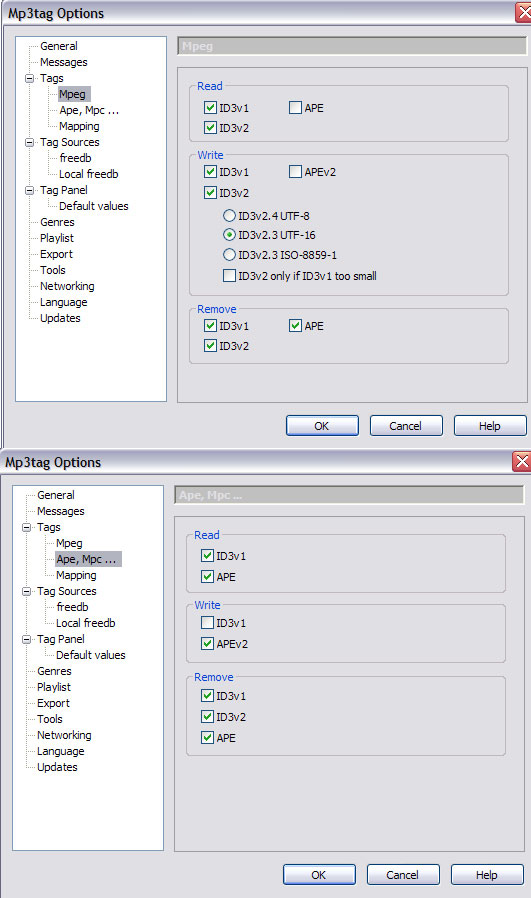 Also disable the APE read in the second dialogue. 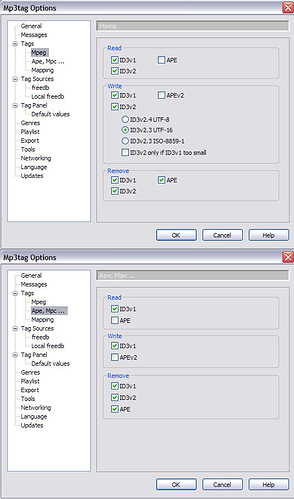 Which audio format are you using??

... and? What did it do? What did you do? There were several more suggestions.