Help with tags (WMP vs itunes)

I use WMP to play my files, because the sound doesn't come out as low as in stupid as a rock itunes, plus the interface is more pleasant.

I use itunes for its superior and way better tools to create automatic playlists that allows me to use an endless variety of criteria, which in WMP are simplistic at best.

Right now I have a problem to find a tag that exists in both WMP and itunes, that is appropriate for the task, and that will allow me to select tracks automatically in WMP that are not Easy listening/slow ballads.
For that, I tagged all tracks that I like and that are Easy listening in itunes, using the Subgenre = Easy (in WMP, this tag is called Subgenre instead, and in Mp3Tag it's called, Contentgrouping.)

Now, because stupid as a rock WMP doesn't allow me to create a playlist using "subgenre does not contain Easy", it only allows me to pick "Subgenre" Is or Is not or Contains, I'm in an impasse.
But the problem is that I've been adding more info under Tag Subgenre, which causes the Subgenre is not Easy to no longer work, for example, I now have tracks with Subgenre Easy\Picard, instead of simply East, so criterion Subgenre is not Easy will no longer work for that one.

So, if you were able to understand the catch 22 above, what I need to do is to find a tag X that exists in both itunes and WMP, so that I can populated it in itunes with Easy (X=Easy), and then use that to select tracks automatically in WMP.

To cut a long story short, do you know tags that exist in both WMP and itunes (for playlist creation), that I can use with that intent?

One such tag is Subgenre=Grouping=Contentgrouping, but that one is taken already.

Think this should be in the general section.

Not sure what you can do in WMP and how it handles their AUTOPLAYLISTS but it's no harm to try foobar2000. It's sounds like you need an amazing player and organiser in one instead of moving between the two.

I'll give you some examples of it's filtering to create AUTOPLAYLISTS or SMART PLAYLISTS as they're called in iTunes. It has the same power as iTunes and more in places. The only thing missing is, it can't base playlists on others which isin't that big of a hassle and easily worked around.

Comment has R5 in it. My place where I put my rating

You can use your own custom fields and create AUTOPLAYLISTS or SMART PLAYLISTS based of them, like this.

Energy levels of tracks with 4, 5 and 6 AND is Electronic Music Energy level generated in mixed in key software, scale 1-10

To get around the sound checking issue you mentioned, it has replaygain too (tags the tracks with db values to level the sound). Main reason why I changed from iTunes after many years was because its built in Sound Check sucks. It seems to dynamically compresses the music with its algorithm and never really gets the overall db levels right, plus, it's proprietary to iTunes only, meaning it only works with their stuff.

Here's a screenshot of my FB2 UI. This is my build, which was built to how I used iTunes (But jacked on PED's).
If you like the WMP UI, I'm sure there's foobar builds out there to resemble it.

I can't speak highly enough of it.

Sorry about the quality or the Screenshot but restricted to 250k upload and sorry I'm no help to your original Q. But why use two players when you can use one. 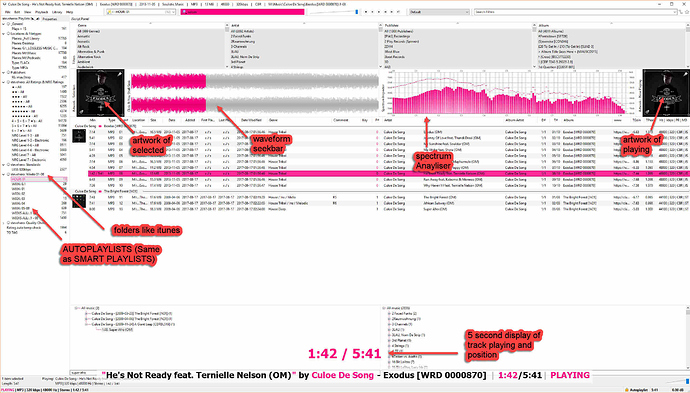 Thank you steve, will have a look.

By all means, do. I can zip my portable setup and put a link up here if you're having trouble, but I'd advise you to start from scratch and learn about it because it's very powerful.
It takes a bit of tweaking to get it how you want it but well worth it.