This only thing I use MP3TAG for is to place "pictures" onto MP3 files or place the normal CD cover art onto the MP3 after downloading from someplace.

In 99% of the cases add any "cover" or picture seems to work fine, and I love it. However, I have a couple of CDs that REFUSE to accept my pictures/icons. It's weird because I have two "CDs" I downloaded from YouTube. They have NO pictures on them, and I created an "album" or hodge podge MP3 songs. I do this often, and when I add a "cover" it usually works. However, I have two that I created that once I add them to my music program it automatically puts the real cover art onto the CD using (usually) the original cover from the first song or two. When I try to over-ride it with my own via MP3TAGS it doesn't work.

Do some MP3 some some kind of embedded thing that forces it to use it's original art even if you downloaded it without any art? If so how would I go about removing that information so that it'll accept my covers?

Bare in mind I'm not particularly savvy with computer stuff. I'm an excellent "user" but when it comes to technical stuff I'm kind of dense, LOL.

Thanks for your help.

Do some MP3 some some kind of embedded thing that forces it to use it's original art even if you downloaded it without any art? If so how would I go about removing that information so that it'll accept my covers?

No, there is no possibility to force something like this.
And you can not "protect" your songs from changes either.

(id3) Tags in your MP3 songs are just metadata, mostly in textform. One exception are the cover pictures.

If you press ALT + T (Menu View -> Extended Tags) on your song (which refuse to accept a new cover art picture) you should see the existing tags and in the higher right corner the existing cover. You can press the red x button and remove such a cover. 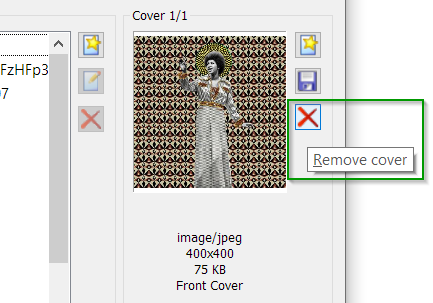 This is not quite clear to me: does MP3tag show everything the wa you want it but the player does not?
If that is the case, then you have get acquainted with the functions of the player, does it use a file called folder.jpg? Does it have a cache that need to be cleared?
And then it would be interesting to know whether you have filled the fields ALBUMARTIST, ARTIST, TITLE, ALBUM. If one is missing, it is fairly likely that the player groups files togehter as "the tracks from the missing ALBUMARTIST" or "the file from the album with no name".

This only thing I use MP3TAG for is to place "pictures" onto MP3 files or place the normal CD cover art onto the MP3 after downloading from someplace...

...It's weird because I have two "CDs" I downloaded from YouTube.

The original source of these files may be the issue. There is a chance the files may be corrupt, or not be the proper format for tagging or player software to handle correctly. I'd check their integrity before you look for any other solutions.

Let me try to explain better ...

I create "Albums" myself by using a mix of different songs, and I change the "properties" of each song giving it my own made up album name (i.e., "My Country Favorites").

Using MP3TAG I go to the Directory for whichever album. I then select all (from "Edit"). If it has a cover the cover will appear. In many cases they begin with a cover of their own, usually using the cover of the first song in the album (if it has one). Within my albums I drop in the "Cover" I want to use (which are usually designed by me to match the name of my newly created album). SO if there is one there, I "Remove Cover", then I select "Add Cover" and choose the over I want to use.

Once I do that, I then go back into my music program. If the new cover doesn't appear on the album already, I then click it and select "Edit" .. When the edit pops up and then select "Save" and it usually will switch the album cover to the cover I created and chose.

This works almost always. However, there are two albums that when I hit "Edit" to switch to my new album cover it doesn't switch. Though within MP3Tags it appeared to have worked. The new cover appears and every song in the folder switches to the new cover. However, within the music program (which is Groove) there are three of these albums where it all switches back on its own to the original album cover.

This is what I can't figure out. I have about 90 of these albums I created ... And all the covers switch/change just fine, except for three of them, and I cannot figure out why they are the only ones that aren't working.

If you are not sure, please supply a screendump of the files of one (self-made) album that shows the columns for these fields plus the tag panel one the left. Please select all files, the create the dump.

Could be the image itself. Try using one that you know works from another music file.

I can't recall all of the limitations, but I do think they must be RGB and 8 or 16 bit (max) colour if I recall. Layers and interlacing also cause issues.

Yeah, all the fields are properly filled in, and I know the picture I'm using is good because I use it on two other "albums" and they work fine. However, the main MP3's ... I had a copy of the file that I deleted, and when deleting it stopped at one of the songs saying ... "This is a system file. Are you sure you want to delete it?" ... Makes me think at least one song on the "album" has some kind of system thing attached. If so, perhaps that's what's causing me to be unable to alter the cover art? Unfortunately I don't remember which song it said that with, or I'd try not using that one song and see if it then worked ???

This is a system file

Does this refer to "folder.jpg"? It could be that these files still reside in your folders and often they are hidden and read only.
And as you use a microsoft program like the old WMP, it could be that also Groove Music relies on them.
So please set the explorer so that it shows also hidden files and then check if there are hidden files in your album folders and if so, check if you really need them. You don't need them if they are called folder.jpg and/or albumartsmall.jpg.

Thanks. I'll try this. I do believe some of the folder.jpg are hidden. They do not show up in the folder itself, but once in Groove the album cover automatically appears, so it must be a hidden file in order to suddenly show up.

For anyone who cares ...

I finally solved the problem. I knew there had to be a solution. After all if it worked for 90 files, why wasn't it working for the other three?

It was because files were "Hidden". However, that alone didn't solve it. I had to uncheck the box that reads "Hide Protected Operating System Files" ... Apparently folder.jpg and albumart are considered protected system files. Once I unchecked that then those files appeared in the folder and I was able to delete them. This then allowed my art to be used.

If anyone else runs into this issue, I hope they see this post !!!!

Thanks to all those who replied and tried to help. Your help was helpful.