I have over 5000 songs. They are well organized, but I rarely have full albums. So I usually group songs under an artist' folder. So I often have multiple songs from multiple albums in the same folder. Naturally, the cover art is always the album name.

The problem is that sometimes, the album name contains special characters that are not supported by the operating system (Windows). Ex: *, :, /, \

I spent some time trying to figure out how to import the cover art for these as well and finally succeeded.

First: You need to have Mp3tag v2.49 or higher because it is the first version to "Support for wildcards at cover import from file". Detailed here: http://help.mp3tag.de/start_whatsnew.html

Nothing too fancy, it uses the standard the Actions (Quick) toolbar button or keyboard shortcut Shift+Alt+6. http://help.mp3tag.de/options_format.html#importcover

This will replace any occurrence of the unsupported characters -- ;:*?\\\\/"<>| -- with a question mark (?) in the search pattern. So when Mp3Tag seeks the cover art file name using the formula, it will use the following search pattern for matching, where (?) can be any character:
Search for: "What's New? ? Your?Love.jpg"

It seems a bit slow, but I've successfully tested it on my entire music collection.

Note: I've always replaced double quotes (") in song titles and album covers with two single quotes (''). Visually, it looks almost the same, and it avoids some problems. My trick might not work with double quotes.

I couldn't find this solution anywhere, so I decided to share it.

Hoping this will help or inspire others, 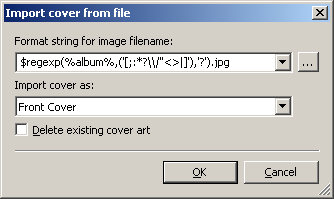 How to remove only the second cover art from 2 existing in a 500 tracks compilation?
[X] Adding cover art fails if there is an apostrophe in the directory path name
Apostrophe's in Action Items