I'm not 100% sure that this is an Mp3Tag bug, but it's something strange I've noticed. For any MP3 file, if I have a track with more than one "contributing artist," as Windows calls it, and I separate those artist names by semi-colons inside Mp3Tag (see here): 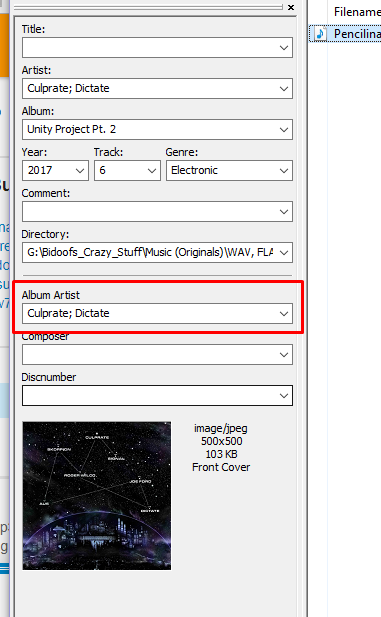 
Then everything behaves as expected; when I look at the "details" pane inside File Explorer, Windows treats these two as separate artists. You can see there here:


Simply pressing the arrow keys when editing the field immediately moves my cursor between the two.

HOWEVER, if I do the exact same steps for a .FLAC audio file (Windows 10 supports reading .flac tags), then for some reason, I CANNOT move my cursor between the two artists (it either jumps to the front or to the very end of the entire text field), which tells me that Windows is somehow interpreting the whole string, including the semicolon, as a single artist.

I honestly don't exactly know what's going on here. I don't know if it's Windows fault or Mp3Tag's fault, but I would appreciate some kind of explanation for the inconsistency. Why should it work for mp3 files but not for .flac audio files?

The display of multiple artists is up to the implementation of the target system.
Whereas WMP may cope with a list of values separated by a semicolon, iTunes cannot, it takes the string literally.

Have you tried to create real multi-value fields (which can be seen as 2 entries for the same field type in the extended tags dialogue)?
And: if MP3tag shows the data just as you entered it and does not modify it, I would look more to the windows side for bugs.