Is it possible to Block Albumart.jpg when tagging files

although, they are hidden in Windows explorer for some reason Mp3Tag detects these items and you have to select yes or cancel. Not bad if you're only doing one folder, but if you're doing a batch of 500 it's going to stop at any album/folder.

Is it posssible to have MP3tag not identify these items. It's always been that way, not sure doing setup if i included something i should not. 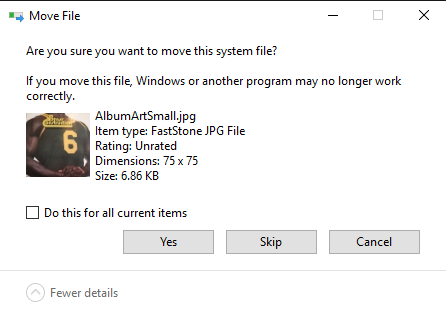 For ordinary tagging these hidden files do not matter at all.
If you rename folders, though, then you get the message from the OS - and that cannot be blocked by MP3tag.

What you could do:
Start a cmd shell in the top-most folder and enter:
attrib -h -s /s *.jpg

This removes the hidden and system attributes from all jpg files so that they behave like ordinary files and get moved without further queries.