the character "&" does not display. I assume this would happen with # as well.

Thanks, I read that. I was just wondering if there was a character you could use to escape the special function both & and # have, like placing a "/" in front of a special character in Reg Ex. But I guess this is not an option?

I don't know of any.
You have to try it.

you could use to escape the special function

AFAIK there is no such escape character.
But you could use '&' for example.
Or use the word and instead of &.
Or use another character like one of the many Unicode replacements like ＆

The ampersand, also known as the and sign, is the logogram &, representing the conjunction "and". It originated as a ligature of the letters et—Latin for "and". The term ampersand is a corruption of and (&) per se and, which literally means "(the character) & by itself (is the word) and." The symbol & is derived from the ligature of ET or et, which is the Latin word for "and." Traditionally in English, when spelling aloud, any letter that could also be used as a word in itself ("A", "I", and, ... 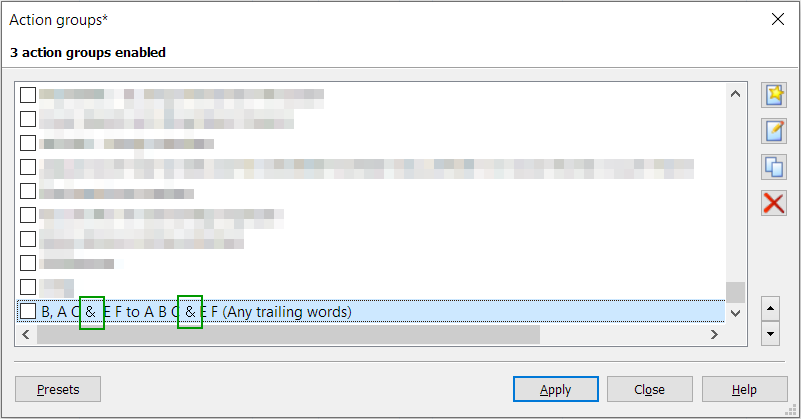 I have and the forward slash just disappears from the name when I save the title. Maybe I will put in a feature request as anything that shortens a Action name is helpful. I would like to use & instead of and.

I could use + or one of your suggestions. I just wanted to confirm that this is what I had to do.

Its funny the & shows up when you open the actions window by clicking on "Actions," but not in the pull down.

You could use two && to make it appear in the menu (this doesn't work with #, though).

Ah, thank you Florian! I thought I remembered there was a way to do it.