Metadata in not showing in Windows 10

I'm consolidating my sound effect library and at the same time, I'm cleaning it up and making sure the Metadata is OK and valid. I'm using the latest version of Windows 10 Pro (v1709) and the latest version of MP3TAG (v2.87a).
Here's my problem, I tried many things suggested on this forum, but to no avail.

I tagged many of my Sound Effects Library files (all .wav files by the way) . All the tags are showing properly in MP3TAG. I even tested the files on a Macintosh with a Mac version of MP3TAG and another Mac tagging application. All the tags are OK.

However in a Windows Explorer windows, for some of the files I dont see the tags. It's not all my Sound Effects folders that have the issue, but enough to make me go crazy...

Here is a screen capture. On the left there are 2 different views of the same folder and on the right, you can see the same folder as read by the Resonic Player (Top Right) and by MP3TAG (Bottom Right) 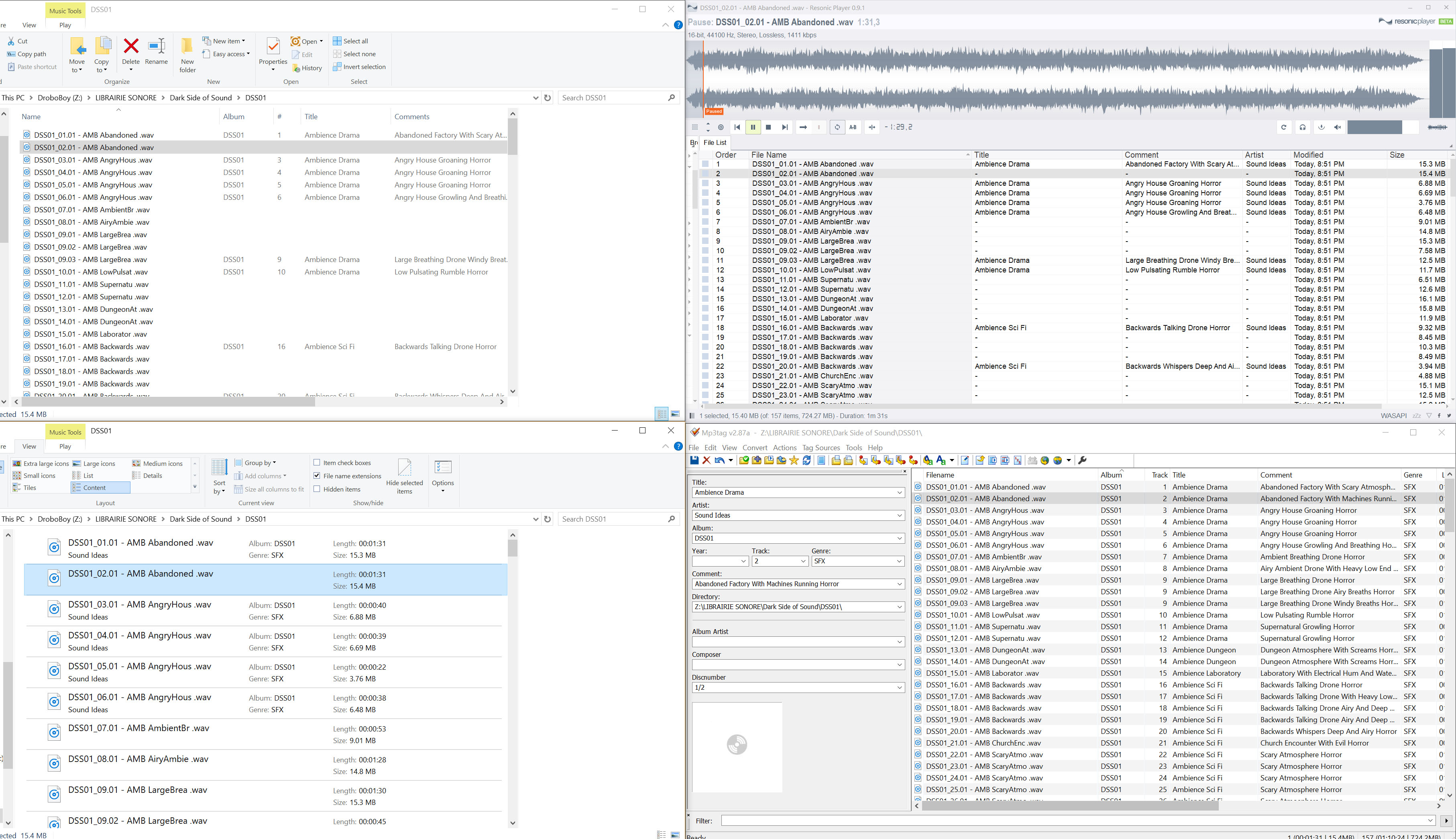 Thanks. Any suggestion is welcomed.

Here is a screen capture

I don't see one....
I would check the files for integrity and file type. Are they really wav files or have some flac files crept in but have the wrong extension?

I can see the screen capture, but have no idea of what might cause the issue by looking from afar.

If you like, you can provide an example file via PM and I'll have a detailed look.

The files without metadata are playing in Windows Media Player, iTunes, VLC, Audacity, Premiere Pro, etc. MediaInfo software show them as .wav files. As it should be, because I ripped the CD myself. However, I ripped some of these CDs a few years ago and they passed from one external drive to another. So maybe all this file moving created some corruption at some level.

I wanted to avoid this (cause I'm a little lazy), but I will rip new files from the CD and it will probably fix it. I would like to find a less time consuming solution, but I'll will not spend 1 months trying to figure it out. Fresh brand new .wav files should do the trick.

I wanted to avoid this (cause I'm a little lazy), but I will rip new files from the CD and it will probably fix

You can try to repair them with ffmpeg.
https://ffmpeg.zeranoe.com/builds/
Just test it on one of them from the command shell and if it works you could define a tools-entry in MP3Tag, select the possibly corrupted in the list-view and launch ffmpeg with the defined tool:

The new repaired wave-file will have no tags.

Check out if those tags are seen in filehandling software like the FreeCommander. You will know then, if it is the fault of the files or of the Windows

I did some more tests, I rewrapped some .wav file that were not showing the metadata. I had to re-tag those files, but it now works. The metadata is present and visible everywhere, including Windows.

Some of theses files were originally ripped from CDs almost 10 years ago. They were ripped on a Mac, and they changed hard drive a few times. Mac formatted drives, NTFS formatted drives, so I guess the files were maybe not optimal. By creating a fresh new .wav wrapper, I solved the issues.. Fortunately, it is mostly my oldest files that have to be rewrapped, the more recent ones seem to be OK.

It is a little time consuming, but so much less than having to re-rip the CDs again.
Thanks for the help