MP3 Hangs at the end after tagging with MP3Tag

I have a situation that recently came to light in regards to my podcast files (mp3) hanging at the end in certain podcast players. Desktop applications such as VLC compensate for the issue, but you can still see that it's there.

One of my listeners started complaining (a few months ago, actually, but I didn't think much of it at the time because I couldn't duplicate the problem) that when he is listening to my podcasts, the podcast finishes with a few seconds remaining on the timer (10 to 25 seconds depending) and then hangs. Happens in Apple's podcast player on iOS and another podcast player he uses (can't remember the name).

My workflow is such: I take my raw file (AIFF or WAV), edit it in Audition, export out a .wav file, do some volume normalization on the .wav file, then convert to mp3 using Audition (I'm using the latest version of Audition CC 2015). I then use MP3Tag to add my ID3 tags. Viola! File done. Except, it misreports the total time of the podcast and hangs in this user's podcast player.

So, to get around that, I can export out to MP3 from Audition, pull the MP3 file into iTunes and edit the ID3 tags there. The resulting MP3 file doesn't hang nor does it report inaccurate time for the file.

At first, I thought it might be something to do with Audition exporting to MP3 and then using MP3Tag, so I tried using iTunes to create the MP3 (at 96kbps) and then adding the ID3 tags with MP3Tag. Same result - the file misreports the time and hangs for the user. What does seem to work for me, is no matter which way I eventually export out to MP3, as long as I don't use MP3Tag to add the ID3 tags (i.e. use iTunes instead - what a pain) then the file works fine.

I've updated to the latest version of MP3Tag to make sure it wasn't something that had been fixed from a previous version. I realize my situation is probably an isolated case (haven't really been able to find anything like it on a google search), so I thought I'd share my story here and see if anyone has an idea on what could be causing this issue.

... the podcast finishes with a few seconds remaining on the timer (10 to 25 seconds depending) and then hangs. ...

Just curious, ... which ID3 tag versions are written resp. collected within the target MP3 file ...
ID3v1, ID3v2.3, ID3v2.4 ...?
Are there any other tag-types involved ... APE, Lyrics or others?
Which type of bitrate is involved ... CBR or VBR?
Duration?
Do you know which codec or external utility tool and version is used by Audition to encode mp3 files?

Just curious, ... which ID3 tag versions are written resp. collected within the target MP3 file ...
ID3v1, ID3v2.3, ID3v2.4 ...?
Are there any other tag-types involved ... APE, Lyrics or others?
Which type of bitrate is involved ... CBR or VBR?
Duration?
Do you know which codec or external utility tool and version is used by Audition to encode mp3 files?

My MP3 files are CBR. Some are 64kbits but lately I've been encoding to 96kbps. The issue is there in both bitrates.

I have MP3Tag set to basically tag with all of the versions of ID3 (that's the default, I guess?). I'm enclosing a snapshot of those settings.

As for what version of MP3 encoder Audition uses, I haven't found the exact version information other than I know it's the same one that iTunes uses (or at least that is what everything I have found says). 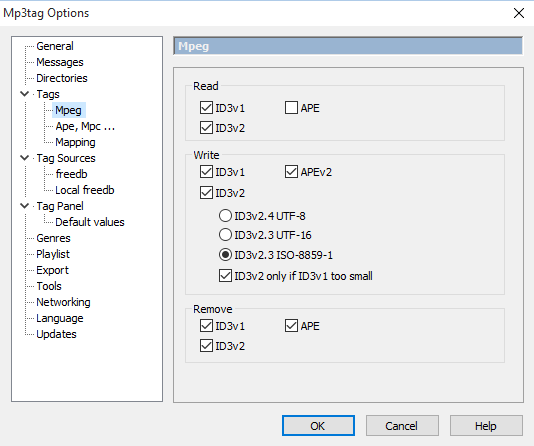 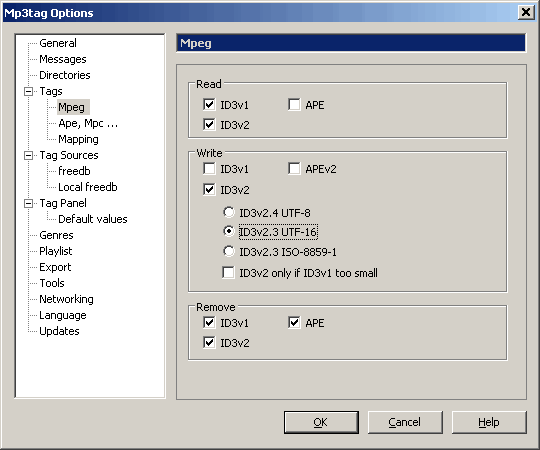 I think that did it. I'll do some more testing, but I think you've solved my problem. Thanks so much for your help!

I have encountered the same issue with my MP3 files abruptly stopping after I used Mp3tag on it.

After using this guide I am happy to report that my files are perfectly working now, thank you very much.