I’ve just released Mp3tag for Mac v1.5 and there are many changes and improvements, some of which I want to highlight here for you:

Beyond that, the new Import feature allows for importing action groups created using the Windows version.

The list of search results when importing from Discogs or MusicBrainz now includes a cover thumbnail to make it easier to choose the correct release. I’m using this for a few weeks now and can’t imagine going back. 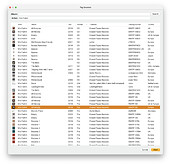 Till now, Mp3tag used an external text file when importing via converter Text file - Tag. With the new version, I’ve added the option to also import via direct text input. It’s especially helpful for cases, where you would create a temporary file just for importing (e.g., a tracklisting that is copied from Wikipedia).

I’ve also worked on many more fixes and other changes that don’t make it into dedicated mentions in this newsletter. However, if you’re interested, you can inspect them all via the Mp3tag for Mac changelog. If something is unclear or sparks your interest, please don’t hesitate to ask.

If you’re not yet using Mp3tag for Mac, you can always get the 7-day trial version — only days you’re using the app are counted.

Thank you for reading, your interest, and your support.

P.S. The first early-access alpha version of Mp3tag was released 2 years ago

Changelog for Mp3tag for Mac v1.5

2 posts were split to a new topic: How do I get an update for Mp3tag for Mac?