Needing some help with player art and album art please

Okay here is what I have decided to do. Instead of getting all the album information and genre information and album titles and such I just decided to put all of my country music in a album called country. And I'm also using my own album art I found online on google images. Its just some basic clip art that I though looked pretty good.

So here's what I have decided to do all the country music male singers and female single young and old are all going to be put in the same album.

I'm going to do the same with rock. And Metal and then I'm going to take a nice looking anime image with a girl wearing heads and use that as my favorite music album artwork.

Since I don't have internet on this phone it wont be updating the artwork its self. So all the album art will never be changed unless I change it myself.

I don't know how to select the player artwork.

the album artwork is currently the players artwork as well how do I change this if its possible. I'm using windows phone.

the album artwork is currently the players artwork

I don't know how to select the player artwork.

What have you done so far with your files? Have you embedded any artwork yet?

I am using the album art that I found online. Its not actually album art but it is in the theme of the music.

I downloaded a picture I searched for "Country Music ClipArt". And then I found (2) of the images I liked.

I also found a few other images for other types of music. 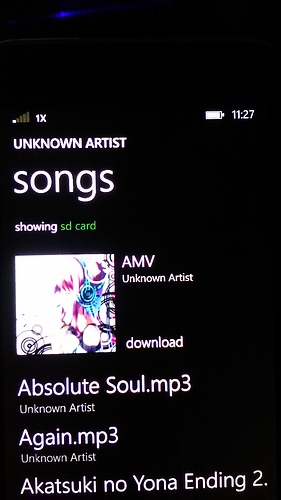 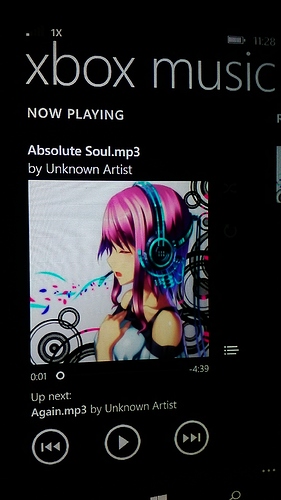 I like the image of the "Girl With headphones" as the album art but I would like to figure out how to change the other image. The music playing image. If its at all possible.

The music player is called "XBOX Music" its from the windows phone.

I also want to change them for my Country Music, Favorite Music, Rock, POP and TV Music. But I have not figured out all of the Album Art yet.

And I see just a filename. I would think that a decent player would show the tag content - if there is any.
So: have you embedded any of your covers in the audio files?
Have you created a folder structure where you store the various music types?

I would fill the tags so that the player gets an idea how to group the audio files.
Empty tags lead to random results in many cases.

Sorry it has been so long since my getting back to the comments. I got frustrated and kind of slowed down. So now I have removed every song from my cell phone and placed them all on a usb flash drive. And now I'm going to sort through them and remove what I no longer listen to and give cover art to the ones I still listen to.

The plan is to use specific album art for specific songs.

example I would like to have something like this show up on all the mp3 files inside the media player while the song is playing. Pretty Music image from yahoo images

I would do a different country looking guitar for all the male country arts. And I would like to only sort the music by genres not singers or albums. That way its easy for my to find music just by images not by looking for names and such. I would name all the albums the same. For every female singer I would name it country. And for rock I would do the same thing.

The part I am having a hard time with now Is figuring out how to have 1 image for the album cover art and having a second image show on the player. If that is even possible.

If its possible please tell me how. I would like the first image shown to be on all the mp3 files. And have the second image shown only for the female country singers album art.

It is possible to embed more than one picture in mp3 files. You can even set the type.
BUT: Does your player support multiple images in a single file? And by "support" I mean "show all of them".
Most players don't.

It would also be quite nice if you could tell us which MP3tag functions you have used so far to solve your problem. This would make things much easier.

Okay I am having a second problem but here is where I am at currently.

(1) The only thing I use in mp3tag is filename and group or singer. But I only use groups or singers if there name is in the title.

I will change this to "Nobody Drink's Alone.mp3 by Keith urban. And then I will find a image of keith urban online and use the same image for all of his songs that I have. I'm not much of a country fan so I will just group all of his together by 1 image.

And files called lessons learned and amazed and watermelon crawl will be all the same album art as the female country singer. There are some country songs I just love and some I don't really listen to much. The ones I love I would like to use my favorite images for. And then the ones I don't are much for use there photo but not album art. If that makes any sense. 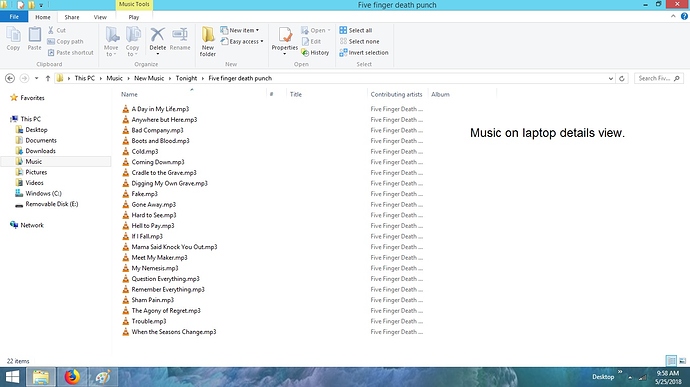 This is how it looks when finished on my laptop these are five finger death punch songs in details view. 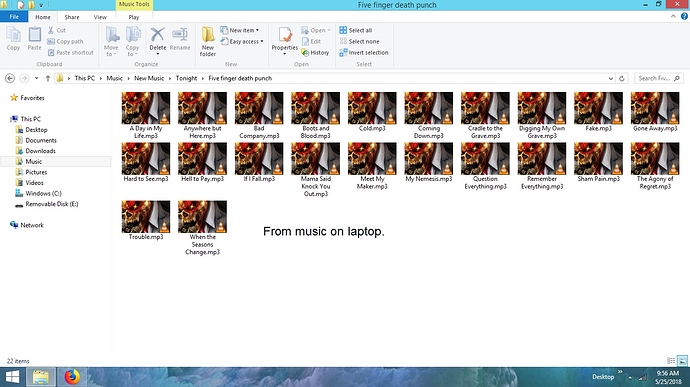 This is what all the five finger death punch album art currently looks like on my laptop. There are songs from different albums but I am using all the same album art for this group. This is how it looks in large view. 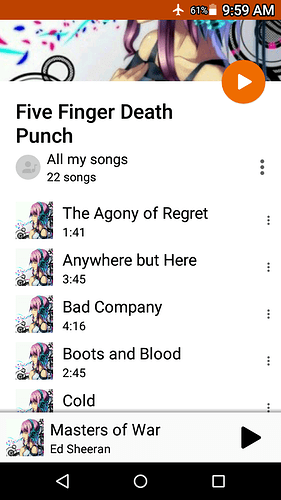 Here is a problem I am having the new album art is not showing up only the older stuff. What did I do wrong and what do I do to fix this problem.

I have gone into the mp3tag program and added the five finger death punch folder and removed all the new cover arts. But now when I click on a mp3 to play it in my vlc media player on my laptop it shows all the older album arts they actual album arts I don't know how to completely remove them. I just want to use the cover art I choose.

I know this sounds odd but please help.

My current cover art/album art is a mess.

I removed the cover art/album art from the second image and now I am getting cover art that is not showing up on mp3tag.

I will ask more about added 2 images as art once I get this problem fixed.

Here is a problem I am having the new album art is not showing up only the older stuff.

AFAIK vlc has a picture cache that has to be cleared to show updated covers.
If MP3tag shows the correct cover, then this cover is embedded in the files and you have to look for other sources that might cache old pictures.
The windows explorer likes to use the file folder.jpg which may be a hidden one. So remove that when you update the embedded ones.

To fix this problem what I did was I removed all the music from the sd card and then removed all the album art from the five finger death punch mp3s in the folder on my laptop and saved the changes so they no longer have album art. So now I don't see album art I will be adding the new art now.

Okay it removed 1 or 2 album art but not the album art from vlc media player.

But I'm me worried about the phone. So lets take a look and see if it changed.

see this thread on the VLC player:

Hi Mike, Thanks for the link: so I delete the VLC cache files, and then only one song cover were corrected(the first song I played actually). But when I play all the other songs, they all display a wrong cover(they all display the same cover from the first played song above!) So I don't feel like removing the VLC cache each time I play a song...I believe there should be a other solution, but still have no clue about it Thanks for any help.

Okay the cover art on the android is still the freaking same. I don't know what to do now. I'm using the google play music app that came on the phone. Dose anyone know how to get rid of the current album art on the player or on a android.

So now I went back into the cellphones internal storage to make sure it did not have the full sized image saved as the image and then into the sd cards album art as well and made sure it was not being saved in there ether and then I cleared the google play music app and also completely shut it down in settings.

So now it should be fresh and clean and since I'm doing all this in airplane mode through usb it should work out fine.

I have my fingers crossed.

After all there are no mp3s on the google play music and the album art has been changed to the 200 X 200 image.

So I'm wishing for the best.

This worked for the vlc media player problem. Thank You!

I changed the album art and am still having issues. here is what it looks like.

Okay the last thing I tried was checking to make sure the phone did not have any images saved as album art there was not any in the internal or sd card storage. So then I removed the mp3s from the phone and checked again still nothing saved. And then I put the mp3s into the mp3tag program and removed the album art and saved it without album art. And then closed the program to make sure it saved. And then I reopened it and added the album art and then saved it. and then added it to the phone and the image still dose not look correct. 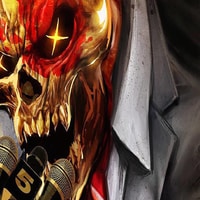 Now here is what the same image looks like on the phone. 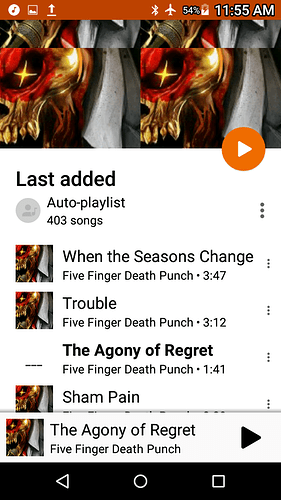 I don't really mind not showing the full image to much the main problem is the image when the song is playing. 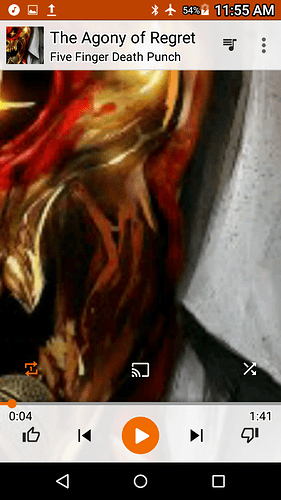 The image is overly stretched out. Is there a way to fix this.

And just in case you are curious this is also the area where I would like to add a secondary image. I would like all mp3 files to play a specific image here.

Please help if you can tell me what I'm doing wrong.