Firt thing first, thank you very much for this amazing tool! I tried almost all tag editors available on windows (litteraly) and only yours filled almost all the cases an order freak like me may need.
And all this with the numer one value of MP3tag : Simplicity!

), covers are a main concern to me. So I thought of 2 ideas to improve this part, in my opinion faster and more friendly user than "import from file"

One of the great things about your pannel is the possibility of editing in photoshop a cover copy/paste from the web, and then copy/paste the result from photoshop directly in MP3Tag, wich allows not to have tons on pictures to save on the HD all the time

To make things easier, I photoshoped my idea. I don't know if this is something that can be done, but I wanted to share it with you 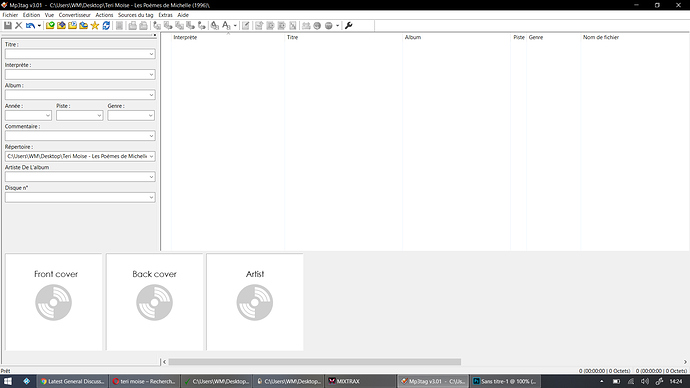 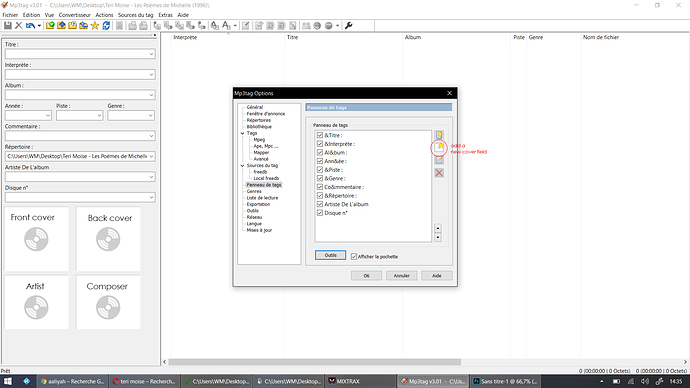 I very much support the idea of a Cover Panel separate from the Tag Panel.

In addition I would find it very useful to get the information of cover types also in writing like multi-value fields.
So instead of showing just "cover" or "artist" in %_cover_type%, depending on which embedded picture comes first, it would be nice to see, e.g. with a command like
$meta_sep(_cover_type,//)and output like "front cover//artist//back cover" if there are 3 embedded pictures.

an option to add as much cover fields one could wish

I would like to have an option to get an automatic display of all covers, depending on how many there are, so that I don't have to adapt the number of picture frames.
Probably, this is the only decent approach as otherwise one would not see how many embedded pictures there are. The current implementation with the little arrows would be somehow a strange mixture: some pictures have arrows, others don't.

The longer I think about it, the more I get the impression that the covers should be moved to a separate window part which would mean that they are not part of the tag panel any more, but, let's say, a separate picture panel. And this picture panel would get a certain size, any number of picture frames, visible controls which are not hidden in the context menu and scaling so that the users could determine which size the displayed picture should have - there were a couple of requests to show the pictures at a larger scale.
(and then it would be nice to set a number of picture attributes not only via the GUI but also via actions, an old request of mine ...)