Hello Everyone!
I am new to the MP3tag community and have a procedural question that may be explained elsewhere,
I am ripping audio books for use on either an MP3 device or to rip on one or two CDs versus 10 - 12.
My question(s): Is there a preferred method of tagging the chapters so they play in order and can this tagging be automated so it is consistent across multiple files and audio books?
Thank you in advance for your input and I love the software!!

see the Tools menu (or the toolbar) for the track numbering assistant.
This function fills the field TRACK.
If you want to keep a relation to the CD on which tracks were found, then fill the filed DISCNUMBER (manually).
As this field is usually not read by players, you could then combine the discnumber and the track number so that the first track on CD 1 becomes track 101, the eighth on disc 3 308 and so on.
That what you apply in the end depends a lot on the way the player treates the files and tags.

Thanks! I'll take a look at that and give it a try.

That method does not combine disc number and track. When I load multiple files to rip they come up sequentially (e.g. Disc 1/ track 1, Disc 2/ track 1, etc.). ow can I combine the disc and track number tags as you mentioned so they will list properly in the ripping software I am using (Nero Platinum 2018)? Your suggestion of 011,021,031, etc. should work fine for me but I can't figure out how to configure MP3Tag to do this.

Once %discnumber% and %track% have been filled, use the function Converter>Tag-Tag for TRACK
Format string: %discnumber%$num(%track%,2)

You are the man!! That string is the "secret sauce"! Thank you again. I want to add that I have used many different MP3 tagging programs over the years and I have finally found the Holy Grail!! Everyone, please support these guys with your donations, they are deserving of your continued support!!
Thanks again!

Okay, one more question regarding the audio book numbering scheme:
How do I alter the string to show discs as 2 digits, the way tracks are shown (e.g. 01,02, etc.)?
I ran into an audio book with 15 discs and listing the first 9 discs as single digits results in disc 10 listing in front of disc 2!! I've tried several alterations of the string but can't seem to hit on the correct combination.
Thanks in advance!

That string does not work at all. It appears to create double numbers. For example: Disc 1/ track 5 is listed as 110105.
Thanks though. I'll keep plugging away!

If you have already run the other action and the track number is already something like
105
then it is clear that the repeated processing adds another discnumber to the already modified track number.

I'll try re-ripping a disc so the data is fresh and try it again.
Thanks again!

wait, wait!
If you can tell what the data in TRACK looks like before you try to add the discnumber, one could probably get the more special cases right.
I mean: re-ripping updates audio and metadata where only the metadata is not quite up to expectations. 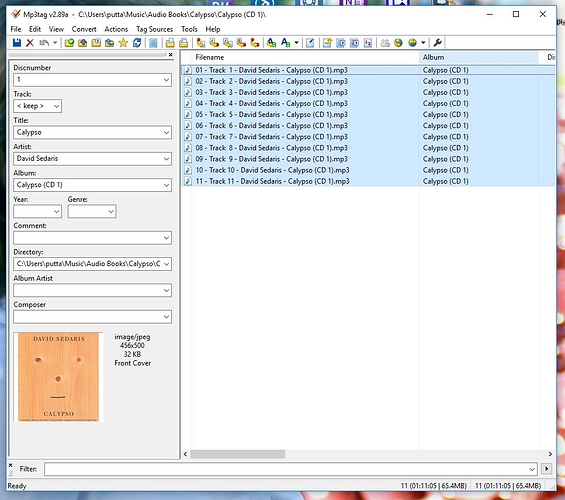 Here's a screen capture of a file I haven't done anything with.
I have been changing the Disc number to 2 digits (01) and then running the Tag string.
It appears to me the track numbers are already listed as 2 digits.

You don't have to add any zeros for padding - this is taken care of by the function $num() where the number defines how many digits are taken into consideration for padding.

The dump, unfortunately, does not show the 2 fields/columns for DISCNUMBER and TRACK

Thanks again for your help.
I'll play around with it some more when I get home from work.

Hello!
Here is what I have discovered in trying to find where things are not going correctly. I have attached a view of the file before altering it. The file is simply numbered "14". I process the file and the detail in MP3Tag shows the file being correctly retagged as 0214 (Disc 02, Track 14). However, when I save the file to it's original location in my "audio books" folder the track number changes to "140". I have tried this with several files and, while MP3Tag correctly tags the file, it changes when it is removed from the program. I'm sure it's something I'm overlooking but any insight would be greatly appreciated.
Thanks!
John 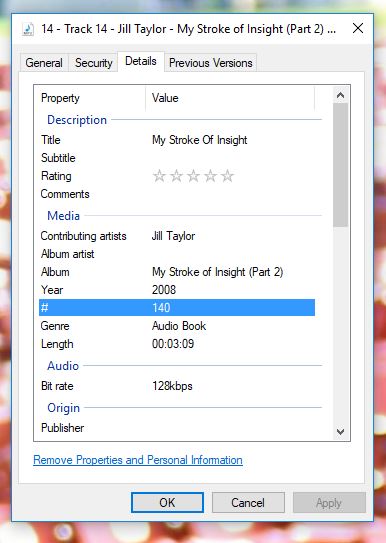 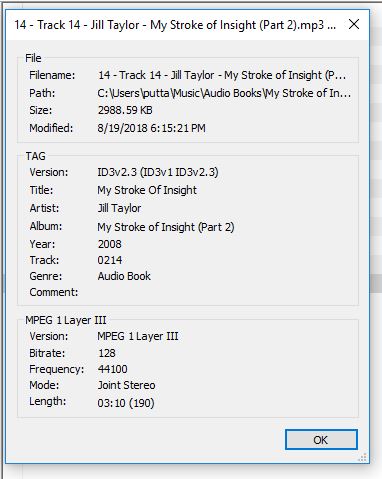 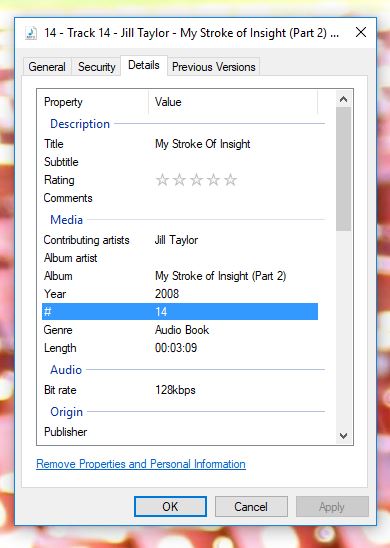 It is because of the peculiar way that File Explorer reads the # detail.
Leading zeros are never shown.
And if there are leading zeros in the # field and there are more than 2 digits, some weird number is shown.
For example: write 0201 for TRACK in Mp3tag and read 129 in # detail in File Explorer.
What the relationship is between that number and what is in the file is a mystery to me.
There is probably some pattern, but I haven't bothered to try and break the code.

My advice is to not combine TRACK and DISCNUMBER into the TRACK field.
You can use them to rename the files in a way that they can be sorted by "Name" in File Explorer.
Or you can just sort using the # and "Part of Set" columns.
"Part of Set" is what File Explorer displays when DISCNUMBER is written in Mp3tag.

This is a problem with File Explorer, not Mp3tag.
I've said it before, now I'll say it again: Microsoft is not known for excellent metadata handling.

but I haven't bothered to try and break the code

Here is some help on the topic:

Maybe. Hmm, few days ago there was a rather similar request like yours now. Looking at your pictures all looks fine with focus to the filenames. When looking at the property sheet of a file resp. at the property column titled "#" there are the quirks. For me ... it looks like ... if numbers with one leading zero will be interpreted as "octal numbers". So that the octal number "010" will be displayed as decimal "8" or octal number "011" will be displayed as decimal "9". I have no definite …

Thank you both for the input. I will continue to try to "sort" through this (pun intended!).
My take away at the moment is that there isn't any defined method of numbering discs and tracks for audio books?
I would have thought this would be a very common use for MP3tag.
Does anyone have a specific system they use in Windows that works and they would like to share?
I will post my system when I develop one for this process.
Thanks!

I would have thought this would be a very common use for MP3tag.

Mp3tag helps you to apply more or less any tagging system that you prefer.

Interpreting track numbers as octal values even though they are decimals is a particular speciality of one player, here WMP and the Explorer. I do not know any other player that behaves in this way.
It would not be any problem at all if players would read the standard field DISCNUMBER and use it for sorting.
And as the players do not follow a particular standard, you have to adapt your tags to the abilities of the favoured player.
This could mean that you add the number to the title or rename only the filename.