Does anyone else's PS3 play some music from your hardrive (internal PS3) on the XMB but in a game that supports custom music (Bejweled 2, Peggle, Dante's Inferno, Batman: Arkham City, et) those SAME tracks will not play?

This seems to be happening to me, for what ever reason I have a few thousand MP3'S on the system that will all play on the XMB but when I go into a game that supports custom music:

Some of the music on my PS3 won't play, oddly I've found different downloads of some of that music (Diablo, Mario RPG, Super Mario World) that will oddly play in one of those above games. Could it be the type of tags (ID, APE, what-ever-else . . . . . .)?

If you suspect these properties: did you compare those that play with those that don't?
Where were the differences? What did they have in common?
Yes, first of all check, if the files all got V2.3 tags - and only those.
Then check the files' integrity.
You would have to transfer them to a PC, though, to perform these checks.

The irony is that every single song of the 5200 (or more) MP3's on the system WILL play on the XMB (the main system menu) but not all will play in a game that supports custom music.

Some screenshots (from MP3 tag it self).

First screenshots of what will play in Game

Second screenshots of what will not play in game, regardless

Perhaps someone here can notice something. I have thousands of playable songs of the PS3 that I could also show the details of.

First screenshots of what will play in Game

It looks to me as though the VBR tracks do not play. CBR (constant bitrate) though do.

It looks to me as though the VBR tracks do not play. CBR (constant bitrate) though do.

Isn't it the sample rate?

Oddly I have about 840 tracks not on the system (yet), and about more than half (455 of them) are Variable bitrate, and I'm sure they play. So it's not always variable or constant bitrate.

there is a program that converts vbr into cbr and vice versa, called winmp3packer (freeware).
You could try to reconvert one or two of the files and try to play them. If it works ... good. If not, we have to continue to investigate.

What options at the bottom should be used? . . .

The bitrate for CBR will be automatically be selected according to the biggest frame. So 64 kbit will hardly ever be selected.

Interesting I'm getting an error with it trying to convert Super Mario All Stars music: 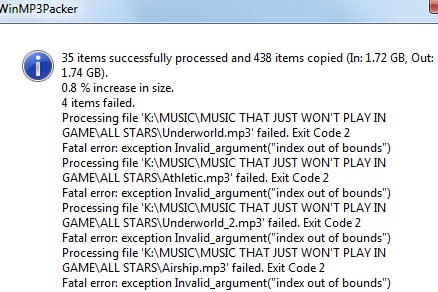 Will see if any of this will play on the system - that didn't do a damned thing, nothing changed . . . .

Interesting I'm getting an error with it trying to convert Super Mario All Stars music:
Will see if any of this will play on the system - that didn't do a damned thing, nothing changed . . . .

perhaps you should check the integrity of your music files using mp3val (also freeware).
And afterwards you could try to convert it again.

And if that doesn't work I can try finding the soundtracks again, I've found some and they've worked in game unlike their counterparts. I wonder if the xbox 360 would do this samething.

Oddly I did decide to try MP3VAL on the music on my computer, and what I'm listening to now, it did find some problems but for what-ever reason I KNOW some of the music that got an error message would play on the system in a game.

The new music (that will play, like Diablo which I found a few days ago) seems to have:

... it did find some problems but for what-ever reason I KNOW some of the music that got an error message would play on the system in a game.

As apparently you haven't got a clue what is wrong with the tracks or the application the only way is to start with the very basics.
One of the basics is that the files are not corrupted.
E.g. if you get the message that a XING header is present but the file is not VBR then this could send a player into the great wide open.
These files should get re-encoded with mp3packer. (oh yes, how did that go on after the files got fixed with mp3val?)

Then I saw in the screendumps that you have a wild mixture of pure MPEG tags and several also with APE tags.
In general, APE tags cause irritation depending on the settings in MP3tag. So, my advice would be to get rid of these.

Then we have got a player that only plays tracks with V1 tags, not V2.3. Also, it refuses to play any tracks with albumart in them (which sort of implies V2.3 tags).
So it could be that some of the games do not like V2.3 tags.
You see, that there is a lot to experiment. And very little that can be judged from a remote site like mine.
It would be nice to hear if you finally succeeded.

Would the version (?) of LAME matter? Encoding settings? . . . I downloaded a program called MediaInfo, as the name suggests it gives you info on media - one being MP3. . . . . I'll just get a screenshot.

(Example of one that does work) 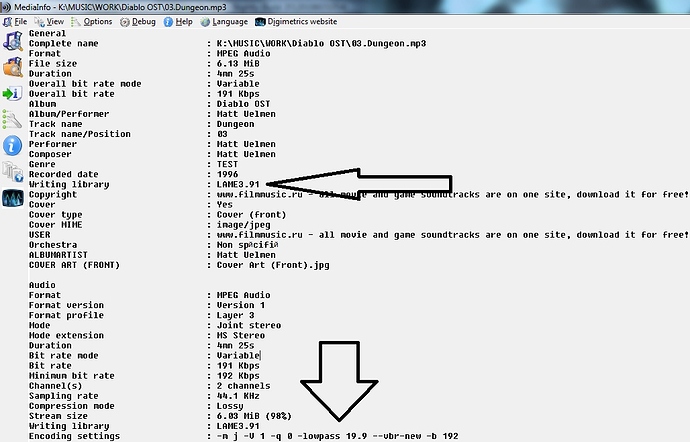 Example of one that doesn't

And? Did you give the non-working one a treat with mp3val? What was the result?

Also: the working file has got jpeg as coverart, the non-working one png ...