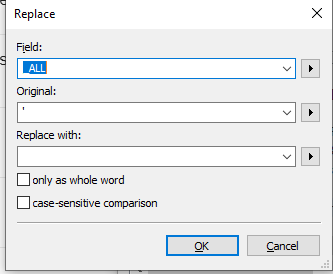 Ant ideas how I canget this to work please.

It could be that the filename does not contain an apostrophe but a different character ... like an accent?
Because i just created a filename from your example with copy and paste, applied the replace action and it worked as expected - the apostrophe is gone.
... so, you are still fiddling with the filename only instead of rewriting it from the tags?
another approach: if _ALL does not work for you - have you tried simply _FILENAME?
Also, you could filter for files with an apostrophe:
%_filename% HAS '
if that file does not appear in the list, then it probably has a different character.

Ant ideas how I canget this to work please.

In addition to @ohrenkino's answer:

If you replace a character like a quote in _ALL fields, you "destroy" your Lyrics and artist names as well. Every occurence of words like I'm or don't or O'Neill will be reduced to Im and dont and ONeill.
I would strongly advise against using _ALL for such a replacement.

Thanks All for your Advice

And waht was the cause that your expectation were not met?

not sure what you mean

Did you successfully replace that character in the filename?
What did you modify to succeed?

I copied the actual ' from the filename and did the replace and it worked, but there still is something strange about the ' as it depends where it is in the filename whether it works.

So the replace function does work as one would expect: it only replaces if it finds a match of that what the user enters.

I don't think that this is true. It depends on what character exactly you enter in the textbox "Original" in the Replace Action. Not every character is really exactly the same (even if they look very similar

Or could you provide an example for us to reproduce this behaviour?