How about if you could freely add and remove separators between items on the list of actions: a horizontal line of some sort, preferably in color; maybe even in more than one color [to indicate different things]. I am talking here about the kind of lines that for example we can already see [but in vertical form] even in Mp3tag- between icons on Toolbar: you have the first one on the right side of the "Undo" icon, next two before and after "Select all files" and so on

I myself have an extensive description of my main cleaning grouped actions and for my second main auto-tagging set of actions. In keep them in external TXT file thus I can make more or less each section [like for example the one concerning only track numbers] stand out- thus find and read them relatively easy. But I have no way of pin pointing selected portion of text from that TXT file on that entries with code within Mp3tag that I see in the window of Action Groups. Only if I have something like 5 same actions [e.g. "Format value"] for the same field [e.g. "GENRE"] or use rarely in one of them some standing out sign [e.g. "█"] am I able to more easily visually match the entries with TXT file. This really is a problem if you have a hundred or more entries in one grouped action and you want to tamper with them in any way while also keeping track of changes in such external TXT file

And so if I had as little as ability to further [visually] group my actions by creating clearly visible sections with horizontal lines, it would be of great help in managing them, especially when correcting them

The more extended version of this feature would be an ability to add "dummy" entry that is not a dummy action: i.e. a line of text that looks exactly like just another action but has only the text the user would put in it but bolded or in color or with a background color changed

Alternatively in front of the text [especially if there would be no color indication for this] there could be something like "DESCRIPTION - " or "User info: "- but I think that if a user wants to see on list of actions a "DESCRIPTION - OF NEXT BLOCK OF ACTIONS" then such user can write all of that down, to own liking

I'm not sure I follow everything you want to do, but here's what I do:

I use dummy actions to separate, with names like

It works passably for me, but of course, you might have tried this route already. You are looking for something more sophisticated I guess.

One thing that could help is if it was possible to create additional submenus. Currently we can use the # for a submenu, maybe the ## could mean yet another sub-level?

here's what I do:

I use dummy actions to separate, with names like

but it not being a dummy action- but just a special element. And I already use such visual separators in my menus


But what I am proposing now are separators not in menu and sub-menus that shows up after clicking the triangle right next to the Aa icon [and in its sub-menus]. I want to see horizontal lines in here and looking somewhat like that: 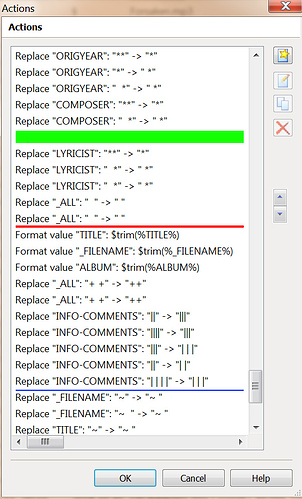 One thing that could help is if it was possible to create additional submenus. Currently we can use the # for a submenu, maybe the ## could mean yet another sub-level?

I am all for it. But that should be made into a separate request, if it was not already had been

Sorry I read too fast before, but your picture helped me understand.

I too think that visual separators would be helpful between the actions, especially for large Action Groups which I have a few.