Note there is no separator on the UI on last version: 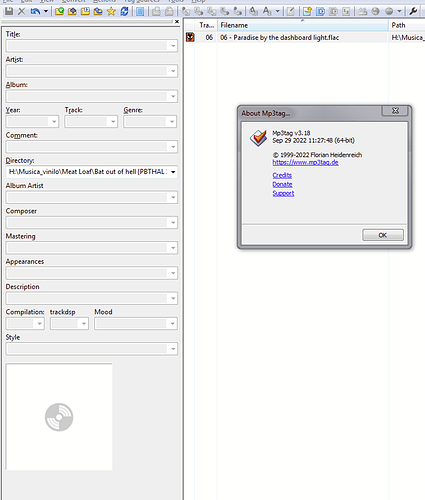 Also there are a few inconsistencies between the new field popup and the edit field popup: 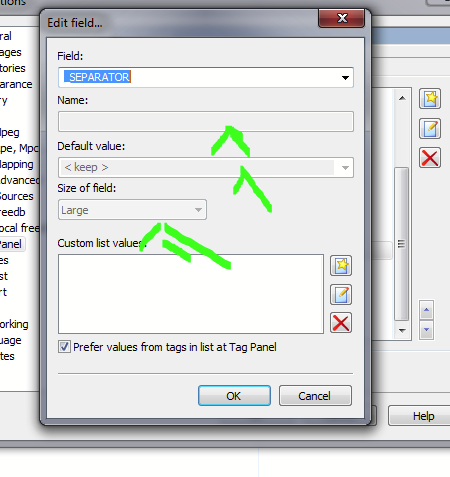 Note editing a separator entry allows to change the name/field/value; while the new field popup have those options greyed out for _separator field.

I just had to learn my lesson and found the following in the documentation:

The special field name ... _SEPARATOR to add a separator that creates a new row.

So you would have to use the _SEPARATOR for a field that is smaller than "large" to avoid that other, smaller fields appear in the same line.
The _SEPARATOR does not include a visible line.

So I would say that it works as intended.
Or in your case: as the previous field DESCRIPTION is already large, there is no further separation (i.e. new line) possible.
Try the _SEPARATOR behind COMPILATION and see whether it works.

My complains are not about the new line not working.

While I thought the same, why adding a name field in such case? That field should do exactly what I ask for; if you leave it blank it just creates a new line (right) but if you modify it, the text should be displayed. Otherwise just don't allow editing the name field.

To configure a field, you need to provide a Name, which is the label text that appears on the Tag Panel. The Field is the actual tag-field name. This can be any of the pre-defined fields chosen from the drop-down list, e.g., ISRC or a custom user-defined field identifier like MYCUSTOMFIELD1.

Also note there is no place at the docs stating that _Separator entry doesn't follow the 'name' behavior. In fact it's stated that any entry will use the name set.

In either case this is a bug, since all entries on tag panel show the Name field. Separator is the only one which doesn't but allows to edit the name (?). Either make it non editable (and warn about it on the docs) or use the set name to behave as a named separator, but current behavior doesn't follow a clear logic or the docs.

My complains are not about the new line not working.

So this means that the separator is actually working.

In either case this is a bug, since all entries on tag panel show the Name field. Separator is the only one which doesn't but allows to edit the name (?)

I just checked in 3.18b:
as long as you have not set the "Field" to _SEPARATOR, you can edit all the other properties - which I think is good GUI style as the user should not be forced to obey a specific order when entering data.

After saving, the entry with _SEPARATOR as field is shown as "Separator" (or in my German version as "Trennzeichen") in the list of tag panel objects.
So, I still think that the behaviour is OK and even fairly close to that what you intend to get.
And if that is true then it looks to me like a documentation flaw.

I showed the behavior on the screenshots above.

Name may be edited, but the name field is not used. Which according to the docs is a bug.

Adding a separator and editing it without touching anything leaves the entry as blank (contrary to the original name being 'separator'). Which is also a bug.

Finally, if adding a separator doesnt allow to edit the name, either don't allow to edit it later or allow to use it to be shown on the panel. Also a non coherent behavior, as shown above.

I showed the behavior on the screenshots above.

This still does not mean that the separator itself does not work.
IMHO it does that what has been described: it inserts a new line in the tag panel.
Your original statement was

Note there is no separator on the UI on last version:
..
Although it's set as such on the config:

Which is an observation due to the previous large field.
So the original title of the thread "Separators not working on Tag panel" should really be "Documentation does not show the full behaviour when using _SEPARATOR for tag panel".

What I am wondering about:
Do you get the new line when the previous object does not cover the full width of the tag panel?
And if so, does the current behaviour hinder you to insert separators?

This conversation is going in circles... have pointed to at least 3 erratic behaviors and things not working as they should be; I don't think the "relevant" topic here is if the thread should be named "Separators don't work properly" instead of "separators don't work" or any other way. You are focusing again and again on a different point than my report and every one my replies. But there you go, I edited the title.

And they clearly don't work neither following the documentation nor as they were supposed to be designed. There you got the bug report, if someone cares about it, since there is clearly something wrong. Best regards.

The separator function is used to force the tag panel to move the fields following it to start from the below the previous one.

While the name field for the separator does not display on the tag panel itself, I find it helpful to use in the options to indicate what the below grouping it is intended for. This is useful when using more than one separator.

I know what's the use of the separator, or the name being "useful" on the options panel, but in any case it's still not working as expected. And there are at least 3 bugs here.

I think your point has been made that you would like to see some clarification around this feature that has existed for a very long time. This is up to the dev to decide if this will be actioned.

I've addressed the inconsistent enabled state with Mp3tag v3.18d. Thanks for pointing!