There is not enough space on device c:

I saw this rather odd error after tagging an album with v3.05.
But there is no indication if an operation failed, or if it's just a FYI notification.

I do have a lot of trouble with random apps being poor at housekeeping and silently filling up C: and I'm not at all levelling this accusation against mp3tag, but I couldn't spot any option to change the temp workspace folder or drive.
Is it possible?

This is usually an OS message.
Have you tried the OS tools to clean up drives?

My advice would be: get a larger drive.

Haven't seen this quite for some time

This is a message from Mp3tag, where I check at some critical points if enough free disc space is available.

It's not only needed for the creation of temporary files, but also for example when settings are written back to the configuration data directory.

Mp3tag doesn't allow to configure different directories for temporary files, that the one returned by Windows itself. However, you can install Mp3tag as portable installation on another drive and only operate on files other than drive C: to circumvent this.

My recommendation, however, would be to identify what's filling drive C: and make it stop.

Tx for the info. It'd be useful to label the error so one would know if an operation had failed or whether it's a precautionary warning that something could fail due to the lack of space.

I've just noticed that something has changed my Windows env variables for TMP and TEMP back to C:

Does mp3tag use those?

Unfortunately diagnosing what is writing to C: is difficult, even with the assistance of Windirstat, Spacesniffer etc.

Nvidia drivers storing up historical driver downloads, MS Edge saving huge amounts of data even though I don't use it, AV apps squirreling away folders full of hundreds of tiny files containing what I have no clue, installers unzipping into root folders ...
Basically it seems all the developers have huge drives and have no need to care! I went from 120GB to 240GB and thought all my problems would be solved but it appears not.

It'd be great if the OS devs could mandate clearly separate places for app images, temp workspace, config, data etc. but I know it's a hopeless dream!

But I didn't know mp3tag could be run as a portable app (I've not really considered that as an option before and I see the install prompts about it!) so I'll look into that too.

I just wonder that your OS is still booting / comming up with so less free disk space left.
(Surely Windows Update won't work any more, a lot of system functions fail)

For Windows 10, 120GB System partition should be enhough, 150GB is better. 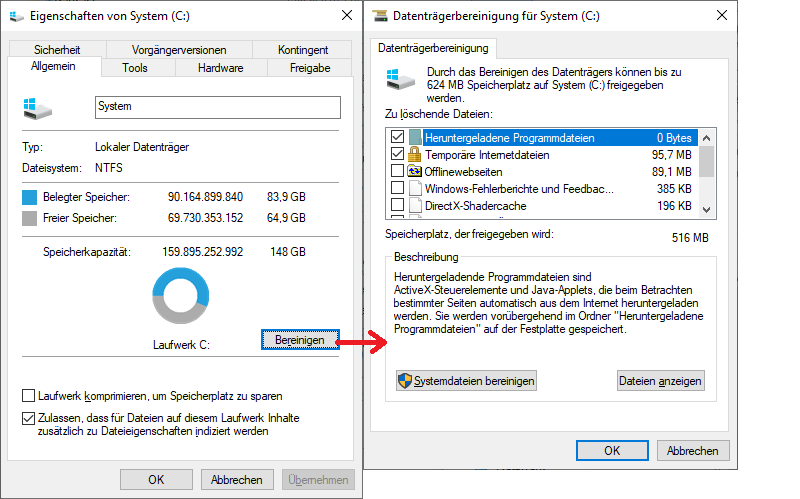 Tx but believe me I've run Windows for many years (MCSE on NT3.51) so I know all the standard admin clean-up methods. Sometimes you end with even less space after a clean-up.
I wonder how long netbooks that used to be sold with 32GB drives lasted with Windows!
And don't get me started on why the Win10 media creation tool insists on 8GB free space on C: just to download an ISO (on another drive)!

Tx but believe me I've run Windows for many years (MCSE on NT3.51) so I know all the standard admin clean-up methods. Sometimes you end with even less space after a clean-up.
I wonder how long netbooks that used to be sold with 32GB drives lasted with Windows!

I developed small Windows Embedded devices before my current job. No problem running directly from small ssd/stick for years 365days/p.a. cause of ewf (enhanced write filter)

Boot time? No problem cause of hibernation file!

And don't get me started on why the Win10 media creation tool insists on 8GB free space on C: just to download an ISO (on another drive)!

I didn't mean NT3.5 was anywhere near Win10, just saying how long my Windows 'sentence' has been, and that many things have rather depressingly not improved that much.

Yes the Sysinternals tools are great, Nircmds too. But really we shouldn't have to grub around diagnosing this stuff.