I'm sure I'm just missing it, but I have not figured out how to split the Comment field into two separate fields. The comments contain regular comments until "Lyrics:" and then "Lyrics:" is followed by the lyrics. I am trying to copy the lyrics to the UNSYNCEDLYRICS tag and remove them from the COMMENT field, while leaving the COMMENT content preceding the word "Lyrics:" intact.

I tried replacing "Lyrics:" in the comment field with ";;;;" and then tried Split Tag field again...

I've tried removing spaces in the separator as well. What am I missing?

I think you are using the wrong action.
Split tag field splits existing data in 1 field into several fields of the same type.

I think the correct action would be
Import tag fields

Mp3tag for Mac provides a variety of Actions, which can be used on filenames and tags. The actions can be applied individually via Actions → Quick Actions ⌥⌘ 6 or be grouped into named and reusable Action Groups via Actions → Actions ⌘ 6. Action Groups serve as repeatable workflows in Mp3tag for Mac. When using Quick Actions you can select one of the different available action types from the list. This action will be applied to the selected files and the changes are saved immediately. Tip 1…

Thanks for the suggestion. I should have mentioned I also tried Import Tag Fields. I suspect maybe I'm using it incorrectly. I did read the guide with Florian's example for Mac and the Windows version (same example), but I must be missing something. I have tried this:

I have also tried:

Neither one produces any changes. Any insights to the correct syntax?

I have also tried:

Looks a lot more plausible.
The basic idea is that the action "Import Tag fields" works almost like the Converter Filename-Tag - only that you can set which string should be the source. The converter assumes the filename as source.
So, without an accurate representation of the contents of COMMENT, I can hardly say anything about the correct pattern for the target.
At the moment it looks like you have some text in COMMENT which features the word "Lyrics:" and that this word should serve as indicator where to divide the data.
That separator has to be painstakingly correct: spelling, case, leading and trailing spaces, punctuation.
So if you do no succeed now, a screendump of the field comment in edit mode, taken from the extended tags view would be nice.

I guess that would have helped to add an example comment, so here it is: 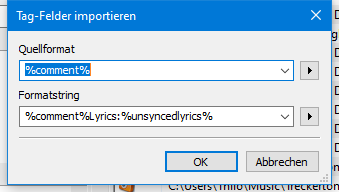 Source: %comment%
Format string:%comment%Lyrics:%unsyncedlyrics%
and that worked for your example.

I'm at a loss why this isn't working. I'm not sure if I feel better or worse knowing that I was entering the correct formatting.

From now on I cannot help you any more -
This is the result I got with the above example text in COMMENT: 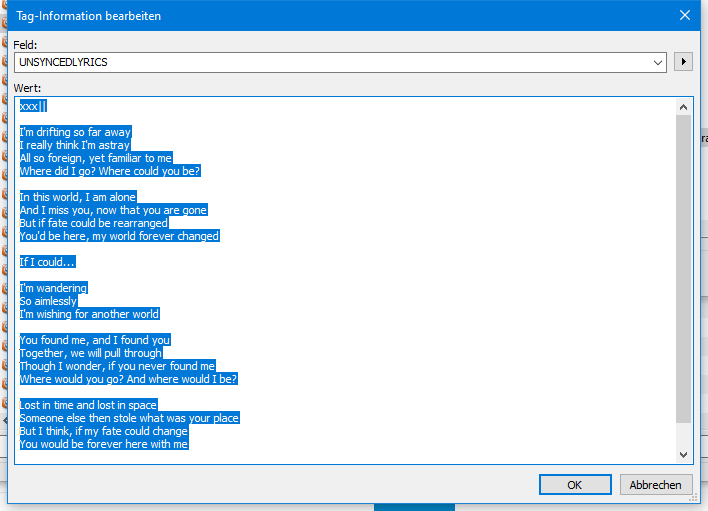 So the only explanation would be that the separator still does not match or that the way that you enter the fields on a Mac is different from the way it is done in the Windows version (e.g. from a field list and no % around the names).

I appreciate your help either way. I just finished testing in the Windows version through a VM and it is working perfectly. I'm wondering if there is an issue with Windows versus Unix line endings or something. I've been trying to avoid using the Windows version, but apparently that is necessary in this instance for some reason.

The %tag% formatting has been the same on the Mac version in all of the other placeholder fields, so I don't believe that is the issue. Maybe when Florian's back on the clock he'll have some insight, but thanks again either way!

It seems to be an issue with the newline characters that are handled differently on Mac and I'll have to adjust the parser to also match those.

Thanks for pointing and I'll keep you posted!

I've fixed the issue and added support for matching multiline input with Mp3tag for Mac v1.7.3.

Thanks again for taking the time to report this issue!

Thanks for fixing it so quickly and confirming I'm not looney.