My apologies, and I hope it's not inappropriate to attach someone else's work, because even though I am not the original VBS script author, @DetlevD, who, according to someone within the Mp3Tag community, is no longer active in the Mp3Tag community, I was hoping that someone can modify his VBS script that allowed the date modification of %LAST_FILE_MOD_DATETIME% to equal that of %_file_mod_datetime% (aka Windows File Properties "General" tab: "Modified") to also include an option of changing the creation date (%LAST_FILE_CREATE_DATETIME%) equaling %_file_create_datetime% (aka Windows File Properties "General" tab: "Created") as well? In addition, I was wondering if someone can include an option to adjust for Daylight Savings Ending or code it as WYSIWYG (or what you type into the Mp3Tag field) because, upon entry, between the months of November (1st week or so) until March (1st week or so), for example, when I added the date, 2022-02-18 15:58:29 (3:58:29 PM) and then ran DetlevD's script, the new File modification date became 2022-02-18 14:58:29 (2:58:29 PM), which was not what I wanted. Moreover, the current script will only work on Mp3tag's field entry formats as YYYY-MM-DD hh:mm:ss (i.e. 2022-04-27 14:58:29) and, surprisingly, MM/DD/YYYY hh:mm:ss (i.e. 04/27/2022 14:58:29), but it will NOT work on field entries with date formats as YYYY-MM-DDThh:mm:ssZ (i.e. 2022-04-27T14:58:29Z, 2022-04-27 14:58:29-07:00, nor 04/27/2022 14:58:29+07:00). Basically, if possible, what I desire is the modification of the creation date, and to address the Daylight Savings issue, but if anyone feels the need to include other date formats (i.e. YYYY-MM-DDThh:mm:ssZ, YYYY-MM-DD hh:mm:ss-00:00, etc) for those to may come across my same request, that would be wonderful as well. Thus, I attached his script below, which was acquired from File-Datum zuweisen / aus Tag generieren, but the main topic that brought me there was File Modified Data and Time Question. And I would like to extend a future thanks to anyone that attempts and/or successfully helps with my request.

AFAI understand the script it takes, as DetlevD states

the VBS script should return a valid result as

is filled.
Who fills that field? I think that would be you, the user. So you have all the options to adapt any input to match the required format. And once you have adapted the contents of LAST_FILE_MOD_DATETIME the existing script should work.
Which means: you have to take care about the daylight saving times and add or subtract 1 hour. Also you have to remove any "T" or trailing letters.
And all this could achieved with actions that you execute prior to calling the VBS script

I don't mean to sound crass, but I already achieved all that. Moreover, as I mentioned above, what I seek now is for the script having the ability to change the file creation date as well, as it does for the file modification date. Please see attached image below 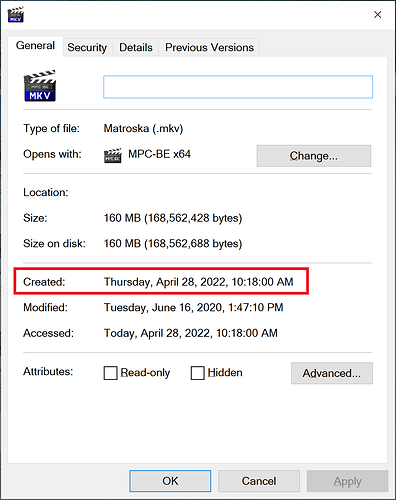 File Created date is OS managed and cannot be changed by mp3tag. You can copy it, or manipulate that in another field, but not the original field.

Modification date can be influenced by any change to the file. So there are ways to accomplish that. But the creation date is exactly that. Perhaps there are some ways to do this externally from mp3tag, overriding the OS itself.

There has plenty of discussion in the past for this that ended up in this same place.

Hi people, Is there a way to copy the creation dates and times of a bunch of files to another bunch. I've tried the export function to a text file: $filename(txt,utf-8)$loop(%_path%)%_file_create_datetime% $loopend() and to import from this *.txt to the new files, but that does not work, files dates and times didn't change. I have three doubts: 1 - In the resulting export file order of times is given by filename, I changed %_path% with other parameters, and the result is sorted according t…

Use FileTouch utility to change file dates and times.

Thanks. Hope it's not asking too much, but can you provide a parameter for me, similar to what I did with mkvpropedit (please see image)? However, in this case, instead of %creation_time%, I was hoping for %win_create_date% entry. I am not familiar with Touch.exe regarding how the syntax/command line string is written

Ok, I'm not familiar with Touch.exe command line, and since you recommended it, I was hoping if you, at least, had a command line string for me, as an example. I am familiar with ffmpeg, mkvmerge, and mkvpropedit command lines, as evident from the example below, but not with touch, and was hoping, at your leisure, if you can just provide a command line string example, and then I can work from there, or if there is a forum with ample examples of Touch.exe that you can direct me towards would be greatly appreciated 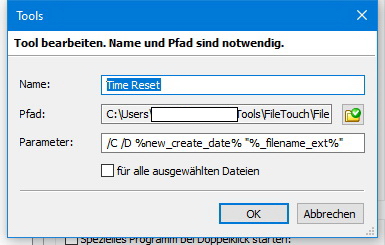 Thank you, sir. The date change worked, but only after I removed the time (hh:mm:ss) from the format, MM-DD-YYYY hh:mm:ss. Nonetheless, do you have any suggestion, regarding other software, with a command line, that I can use to that actually handles this format, MM-DD-YYYY hh:mm:ss, because Touch seems to require separate fields (i.e. %date%, %time%) instead of both simultaneously?

Can't you look for some suitable program yourself?
I mean, this topic is wandering hard on the border to become off-topic as most of the questions about command lines for third party programs have hardly anything to do with MP3tag.

If you stay with MP3tag, then you have several options.
You can adapt the parameter definition in the tool with a suitable regular expression so that you get 1 part for the date and the other for the time.
Or you run an action that splits your current date field into one for the day and one for the time.
And in the future you enter the data in the correct format in these 2 fiélds.
You would have to adapt the tool parameters accordingly.

Point taken. Whomever you are, thank you. Nonetheless, I have scoured through the web searching for tools like that of Touch, which I first discovered from you. I am in the medical field (PharmD), and we young pharmacists consult the senior pharmacist because they have vast years of experience (aka knowledge), and other treatment avenues are hidden within them. I seek guidance and recommendations from those who know more, which was why I posed the question, given that, when I search via Mp3Tag forums, you and @ryerman's names are always answering questions. Moreover, I emailed Attribute Changer (aka AC) asking if they had a command line, and they said no, as well as Basta's Filo, NewFileTime, etc. I only posed the question because just like M.D.'s consult pharmacists with different avenues of drug treatments, I consulted you because, compared to me, you have vast knowledge about tools that I never knew existed. For example, I wasn't even aware that Mp3Tag existed since 1999, which, at that time, I was still a child. Nevertheless, thanks for the previous replies, and, if you must know, even the VB scripts that @ryerman provided for me to use upon Mkvpropedit/Mp3Tag, January of this year, I managed to apply that same script with Exiftool.exe, except exiftool, using Mp3Tag, doesn't apply to mkv files. Thus, regardless, thanks for all your help, sir, and have a great day.

So, then tell me:
Where do you have the difficulties to get the command line right?
Where does the date that you want to use as creation date come from? What is the exact field name?
To split a field into date and time I recommend the scripting function $regexp() about which you find descriptions in the documentation

Documentation on support for regular expressions in Mp3tag. Mp3tag is the universal Tag Editor.

I use a lot of regular expression via the "Replace with regular expression" actions, in which I acquire from Notepad++ forums, and try to implement them into an Mp3Tag actions. The scripting function (i.e. "Format value" action type) was definitely the one that @Ryerman, via an action he created, assisted me on mapping %_file_mod_datetime% (i.e. 4/28/2022 08:30:40 PM) to %creation_time% (i.e. 2022-04-28T20:30:40Z), and then to account for UTC, I replaced both the T with a space and the Z with -08:00/-07:00 upon VB script mkvpropedit, and the one I created, using Ryerman's mkvpropedit VBS script template, for exiftool. I have plenty pharmacy videos that I want to archive, which is why I am very keen on the dates. Prior to discovering that mp3tag was more than a tagging tool, on a .TS file, I would rename using the Advanced Renamer exiftool's feature of the renaming meothod ˂Name˃ = ˂ExifTool:FileModifyDate˃, remux into mkv using mkvmerge, used Notepad++ regex to remove everything prior to the equal sign and the equal sign, and then used mp3tag's Convert Text file to tag. That took me awhile to do for 90 pharmacy videos, until I discovered that I could create an action, which I did for the second set of videos. Thus, I assumed that I could apply that same principle of manipulation as I did for @Ryerman's VBS script on DetlevD's VBS script for %_file_create_datetime%, given the fact that I managed to combine both mkvpropedit.exe and Exiftool.exe on a single VBS script .mte file (from @Ryerman's template), but I was wrong. Nevertheless, sir, thank you for everything and I know that I may be a pain in the butt, but I still appreciate you answering the pain in the butt question because these Mp3Tag forums have saved me a lot of time, and if you come across any other tools, sir, please feel free to tell me. THANK YOU

A long reply which anwers hardly any of my questions - perhaps you have overlooked them?

Where does the date that you want to use as creation date come from?
What is the exact field name?

And another one:
What is NOW the exact format of the data in the date field? The best would be to show a screendump of the extended tags dialogue.

Initially, I was going to post my response here, but I had to confirm something with the original author of the VBS Script (@ryerman) regarding a secondary loop. Nonetheless, I found a better version of FileTouch, FileTouch v1.0.0.3 (12-23-2009) by WinTestGear, which is far more effective than the one you use, and I believe you, along with everyone else, will benefit from it. Here is the post response, by me, to @ryerman: Response to FileTouch v1.0.0.3 (12-23-2009) by WinTestGear. Moreover, I will attach a zip file with @ryerman's ORIGINAL VBS Script for Mkvpropedit.mte, my modification of Ryerman's VBS script to apply towards FileTouch v1.0.0.3 (12-23-2009) by WinTestGear, a .png of the available FileTouch command arguments, and the FileTouch.exe file. Thus, my reponse also provides a list of ways that dates can be represented to be read on the program.