I'm using actions to correct all my tags into Mixed case. However, I find that whenever an apostrophe mark is encountered, it automatically capitalises the next letter e.g Don't > Don'T

Without making a long list of additional replacements, is there a quick and easy way to tell the replace command not to capitalise after an apostrophe?

You can set in "Word starts after" a list of characters that define the word boundaries.
If you leave out the apostrophe then the next letter should stay as it was.

Thank you! You are a genius! Not sure why I'd even set that as a word starts after definition in the first place.

You can set in "Word starts after" a list of characters that define the word boundaries.

I hate being dense, but where is this set? I've looked everywhere, and can't find that option.

Thanks, and apologies in advance

but where is this set? I've looked everywhere, and can't find that option.

Documentation on the Case Conversion action type that can be performed as Quick Action or as reusable workflow from Action Groups. Mp3tag is the universal Tag Editor.

It's an option when you create a Replace command under the Actions menus.

Create a new action, give it a name, then under the type select Case Conversion

I hate being dense, but where is this set? I've looked everywhere, and can't find that option. 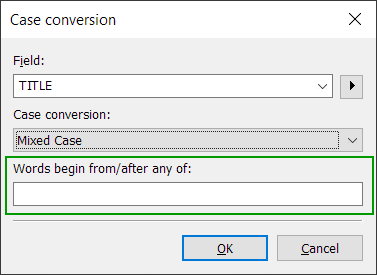 Words begin after any of specifies characters which mark the beginning of a new word. 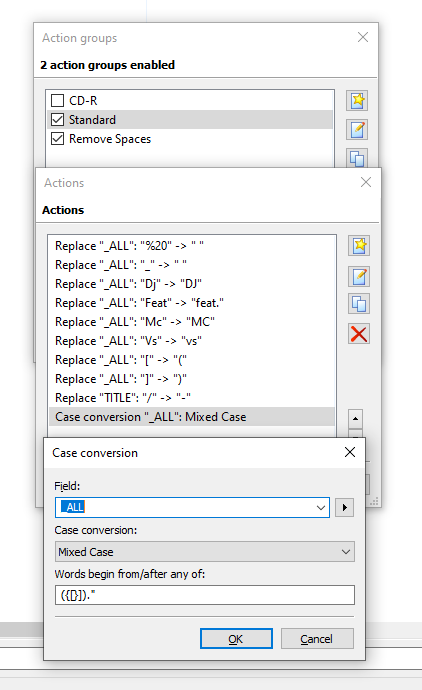 You want to change the letter after every single character in your list of 8 characters
({[]}).*
to uppercase, right?
After every of the 3 opening and 3 closing brackets, after a dot and after a *

And you want this for _ALL fields, including the filename, not only for a specific tag like TITLE or ALBUM, right?

BTW:
If you change all [ and ] brackets to round brackets in two actions before your Case Conversion action, there should not be any of this [] remaining.

To apply case conversion actions to _ALL is usually a bad idea as it will also transform special ARTIST names like t.A.T.u. or üNN
The question is whether the list is really complete or whether numbers should also be included (if the action is applied to _ALL) to cater for 2Pac, 2Inventions, R2DJ, 7A3, 8Ball, 10CC, 8000Below ...

Oh!
Correction on the way! Thank you.

I accept that certain artists name will get messed up, but I tend to also run all my files against Discogs. I'm just slightly OCD lol

As soon as you have tracks in a different language to English, the mixed case will yield only random hits ...
So, if you follow your OCD ... it would be even more a no-go to apply the action to _ALL.

What about UPPERCASE album names and track titles, where you see the artist intent, like this new released album: 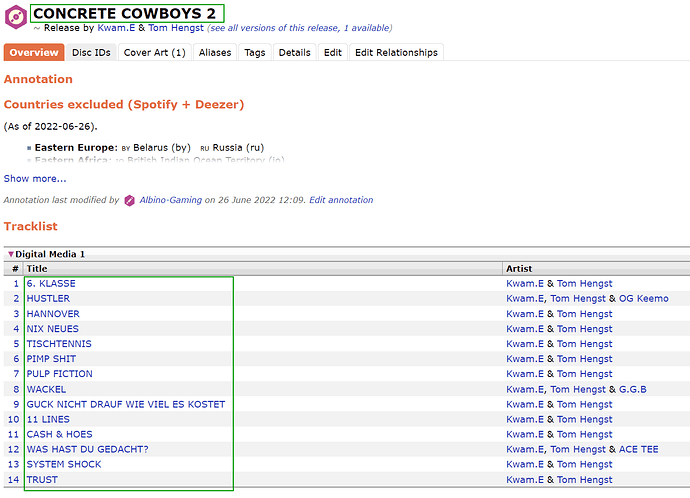 As @ohrenkino wrote: Even if you apply it to the tracks #9 oder #12, the case spelling would be "wrong", because "Mixed Case" doesn't work for German (or other languages then English).

I'm not sure we can cover every contingency in terms of languages, album and artist titles.

Yes, right.
What I tried to point out was:
be careful when you apply an action to _ALL, esp. if you do not see all the fields that would be influenced by it.
The examples should show that there are a lot of exceptions, so I would use a case conversion action only on the fields where it causes the least damage (probably TITLE and ALBUM) and only on checked and then selected files.
But then again: it is your collection, you can do with it, whatever you want - and that is completely OK.