Why are there [00]/Nul Bytes between character-bytes in ID3 binary?

While viewing an MP3 file (with ID3 populated from Discogs via Mp3tag) in a Hex editor, I noticed that successive characters of text fields (e.g. Genre) are separated by a [00] byte. Why is that?

I think I read somewhere that character representations ought to use the minimum number of bytes - which in this case, the characters being from the ASCII set, I had been expecting one byte per character, so the [00] (Nul character or possibly it has some other interpretation) between characters is confusing me. Could it be that (for unknown reason) the genre names dished out from Discogs via Mp3Tag are each represented as two-bytes?

I am just trying to get some solid grounding and orientation here (not coding or anything), hopefully eventually leading to confidence that I am perceiving/understanding/imagining/projecting all the higher-level stuff correctly. 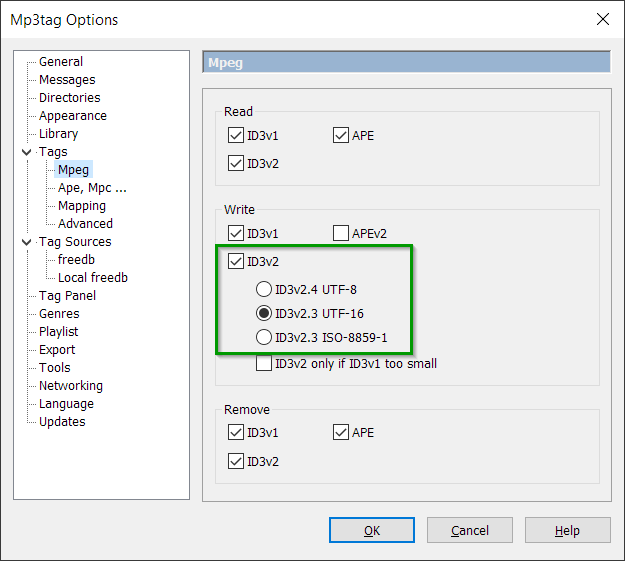 As for all your other "compatibility" questions:
Use the one that works best for YOU in YOUR environment with YOUR devices.

Thank you - short reply is that you resolved my question perfectly!

I guessed that implies the "mystery" [00] bytes had indeed resulted from the text-value characters having been encoded in UTF-16. I just now tried that UTF-8 setting in Mp3tag, re-populated the same file from Discogs, and yes: the "mystery" bytes were now absent.

OTOH, while examining that file in the grammar-driven hex editor ("Synalyze It"), the grammar no longer understood the ID3 format (instead presenting it as just another (anonymous) MP3 data frame). So UTF-8 breaks that app-grammar's model of ID3.

...which makes me wonder if it is (more) likely to break other apps etc. (as compared to UFT-16). Is that why Mp3tag's default setting for this is UTF-16? I'm guessing then that I would be well-advised to stay with that default (UTF-16), anyone agree?

BTW I am using the Mac version of Mp3tag, where the menu does not have a Tools option. Instead, I found it under Menu:[Mp3tag > Preferences... > Tag Types]
In that tab-page, I found it just under the Read and Write options)
(Just pointing that out for the benefit of any other Mac-based users, or indeed possibly to remind my future self)