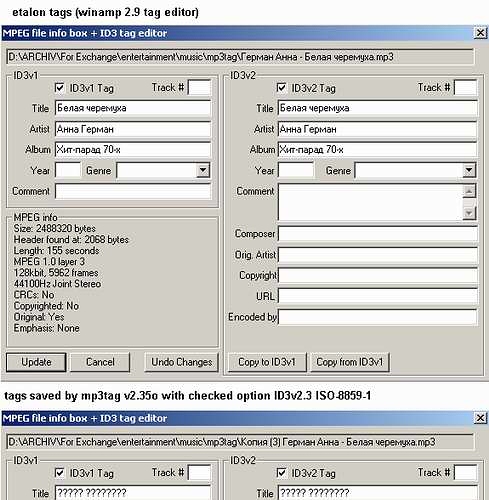 Sorry that's no bug. Cyrillic is officially only allowed in ID3v2 encoded as unicode.
Winamp supports unicode in version 5.21, you need to upgrade your winamp.

Thank you for a fast answer.

Sorry for a needless disturbance.

Sorry that's no bug. Cyrillic is officially only allowed in ID3v2 encoded as unicode.
Winamp supports unicode in version 5.21, you need to upgrade your winamp.

Is it possible to make code selection for backwards compatability more flexible? It worked perfectly in v2.35 , now after upgrade I cannot save Cyrillic tags encoded in Win-1251. The problem is that a lot of CDDB tags historically were stored in this encoding. Plus, although you suggest using Winamp 5, I found it's support for Unicode is not solid - I still see ????? in modern skin with Unicode support. (I don't know what am I doing wrong, in Tag editor the encoding is correct)
Anyway, I guess what I'd like to see is a drop-down box with a selection of encodings in "Tools >Options > Tags > MPEG"

Thank you very much - great application!

I would prefer more simple solution than BlackRussian's.

You can add "ID3v2.3 System encoding" option in "Tags - MPEG" dialog which could trigger encoding using operating system settings (not limited to ISO-8859-1 or UTF-16). I know that it is abusement of informal ID3v2.3 standard, but this is general practice used in such tagging software and media players such as WinAmp, iTunes, foobar2000 etc.

And thank you for your great work!

Your suggestion is a no-go for sure. It has been brought up already and Florian stated that it's not really standard-conform - and don't we hate non-standard-conform software?

If you meaning popular web standarts hype, I say that there is no fully compilant browser, so we should hate all web browsers on planet?

In ID3v2.3 case 90% of mp3 software violate this stadard, and mp3tag have to operate on their data some non-destructive way. It is simply because users are more important than standards.

I am suggesting an option to switch off standards (forced ISO encoding) which shouldn't be default.

Instead of whining and begging for non-standard implementations, I think people should better ask the other developers (Winamp, whatever software / hardware uses the system codepage) to add support for Unicode.

As for the web standards question - yes, not all browsers have a 100% correct implementation of what is recommended by the W3C, but with the help of Firefox and Opera which try to be standards conform and making pressure on IE, we might be able to write some decent HTML code in a few years rather than implementing hacks for this and that.

Instead of whining and begging for non-standard implementations, I think people should better ask the other developers (Winamp, whatever software / hardware uses the system codepage) to add support for Unicode.

I understand the strive to comply with the standards, and support this strive - in general. MP3TAG does a great job moving us in the right direction. But I see at least one inconsistency - if MP3TAG sticks to standards so much, why use option Always write ISO-8859-1 instead of UTF-16 ?
So, if the excuse is to comply with CD players that are dumb and do not understand UTF, why not to extend the courtesy to other "dumb" players, OS-es and such, not add more backward compatibility?

all I am saying is that whatever change was made from 2.35 to 2.36 broke the encoding for Win1251. So I had to uninstall 2.36 and roll back to 2.35
My question was - according to the change log, 2.35 was already complying with all new standards, so maybe there is a bug somewhere?
Cheers,
BlackRu