...in the names of the fields that were formerly above the horizontal line that separated the 'fixed' fields from the others. These apparently were not written as the field name for the corresponding values when tagging a file, and it is simple to remove them using the "Edit Field..." tool.

While it's not even a minor problem in practice, it is a bit messy.

It won't hurt to remove them, but the ampersands are included on purpose.
See here: User-defined tag input fields


I know that for some time we have the ability to more quickly activate and activate fields in the Tag Panel [with a right click menu activated when the click is performed within the Tag Panel]. But nevertheless if I could even more quickly [with a defined shortcut] turn off some field that happens to be a multiline, then I could have such tag field be turned off 99.9% of the time- thus saving space. I would use it for all those fields that I need to see very rarely- because I tend to turn off what I do not need as I always want to preserve / optimize the precious space, so that I can see as much of data / files as I can on a single screen without the need for scrolling

This is not going to happen (also not via an option).

Even if some other combination of function keys was utilized for such shortcut?

It won't hurt to remove them, but the ampersands are included on purpose.
See here: User-defined tag input fields

i'm totally lost. see my screenshot. 1. are these not the default tag panel values mp3tag has on a fresh install? if so, not "user" defined, b/c i, the user, didn't do them, right?

and 2. aside from that, i read your link, but i'm too thick to understand it. why are there ampersands randomly in the setup for these default fields? what purpose do they serve, esp if they can be removed without harm? 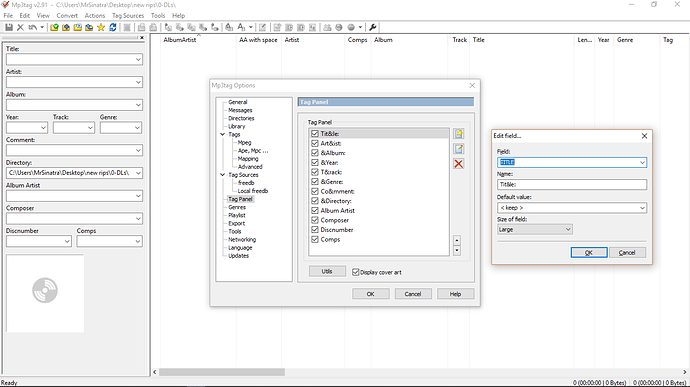 As per the linked help article the ampersand defines the letter that will select the field when the Alt key is also pressed. Eg: &Year means pressing Alt + Y will select the Year field, when the Tag Panel is focused, since the & is placed before Y.

that completely clarifies it, thanks.

might be an idea to include a note on that prefs dialog explaining they make those fields hotkeys.

loved you in "the big sleep" btw!

might be an idea to include a note on that prefs dialog explaining they make those fields hotkeys.

Alt hotkeys can also be added to Action names for quicker access in the same manner, as another useful tip. That's where I first learned of their use.

loved you in "the big sleep" btw!