Accidently I found an artist with a very rare album name:

Ever since Prince turned into the unpronounceable "symbol" or "tafkap" I know that there are more things between heaven and earth that our taught knowledge could phantasize.

Although, to be honest, I don't understand why any artist should do this, esp. the one that @LyricsLover showed ...
Artists have to be known and they must be found to gain some kind of celebrity, they have to stand out from the masses - otherwise they simply vanish in the see of all the other names of artists.
Using such symbols guarantees to fade to oblivion before any kind of fame could come.
I would sack the person who tricked me into this, if I were the artist.

Just imagine:
You see this name on your random radio station playlist and think: How the hell should I anncounce this thing?

Where to place this in your collection? Where would you search in your favorite CD/Vinyl store for this album or artist?

Oh, dwelling on that idea I would have called myself "ASCII 32 27" which would decode to "Space Escape" ... that would have a nerdy ring to it, I think.

What are the odds... Just a few days ago I was using exactly those 3 characters in an Action group. I needed unusual characters that wouldn't emerge in a title or filename, plus I wanted them to be very visible / easily spotted as they were cross-referenced within the Action group.

I didn't even bother to check around if those odd characters could appear in tags, somewhere out in the wild... But out of the plethora of unusual characters and alt-codes you can choose from, I managed to pick some that were already "taken" by this artist. Funny indeed.

Luckily I'm probably too old for their music anyway, so this won't affect my Action group which can remain as is.

...what was the approach when this artist's name came about? "Why don't we look up some cute alt-codes to make us really special"

You know about old ACII based DOS-GUIs?
It was common to use that chars for simple ascii "graphics"
https://miro.medium.com/max/640/1*micS3WjEhtch6IxqHHyCRQ.png

Thanks. The DOS reference didn't occur to me. You're probably right, but I don't remember them looking like the Alt+176/177/178 characters. Could be due to different fonts of course.

... or maybe my memory just doesn't serve me well

Just imagine:
You see this name on your random radio station playlist and think: How the hell should I anncounce this thing?

Where to place this in your collection? Where would you search in your favorite CD/Vinyl store for this album or artist?
[...]

And I would go with naming myself Artist and my tracks from my first album entitled Album: Track #1, track #2, Track #3 etc.

And I would repeat that track naming scheme for Album . That is right: my second album would be entitled Album , not Album or Album #2

And later on I would add a twist to it by making an eponymous album title: Artist. And release singles from: Album, Title, Song- with the leading single called of course Artist


And I would get theatrically upset every time during an interview or during a hit-list airplay if anyone would make a mistake when referring to any element of my body of work. After all: how hard would it be for anyone to say And now from "Album Not" by Artist the "Album " song! - and for anyone listening to understand which was what?

Meghan Trainor has an album with the title of "Title".

Collective Soul (track 2 from their self-titled album) and Eminem (track 17 from "Recovery") have songs called "Untitled" on them. I'm sure there are many others but these stand out. That doesn't include the multiple albums with hidden tracks on them that are either separate tracks on the disc not listed on the cover, or buried several seconds or minutes after the end of a song.

I'm sure there are many others but these stand out.

Just for fun, I checked "untitled" against my collection and beyond the ones you mentioned, found 11 more bands/albums, including Crash Test Dummies, The Cure, Flake Music, Oasis (which might not count since it is "Untitled (The Swamp Song #1)" and #2, Pearl Jam, They Might Be Giants, and Truffle.

Hidden tracks are another head-game entirely.

There are many many more recordings without a name, just called "untitled":

There are many many more recordings without a name, just called "untitled":

Thanks. It's a good idea to to musicbrainz. Didn't think of it.

One more of this strange album names, this time from nano

In addition to the Album name, please have a look at the ASCII-Art titles #10 or #12: 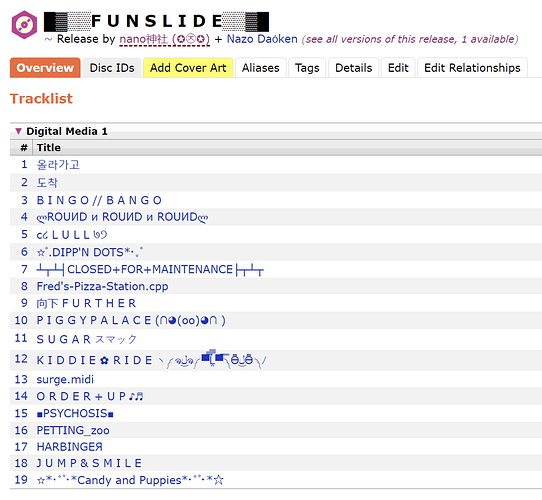