I am starting to use the program for the first time. So far I'm doing pretty well. I have already managed to change everything that I needed to "fix" the songs. But it turns out that there is an album that, although I have a cover on it, does not appear if I open it with VLC. However, I have other albums and they do show up when I open VLC.

Then I tried to send the files to my mobile, and both covers appears correctly. But in VLC it doesn't and I have no idea why that is.

I have already cleared the VLC cache and there are no hidden files in the album folder. But none of this fixes the problem.

has a cover called "art.jpg".

Have you really embedded the picture?
Because ... as soon as you embed the picture, it looses its name. So if you still see "art.jpg" as picture file in MP3tag then the picture is still only in the file system.

So if you still see "art.jpg" as picture file in MP3tag then the picture is still only in the file system.

It's also possible that the filename was used as cover description — but good point!

Ideally, when all files have embedded pictures, the file list stays empty.

If this is the case and the cover is embedded, please check the album name. Since VLC tries to store the album art in directories in the local filesystem, album names ending with, e.g., three dots ... can't be saved by VLC.

Yes. It stays empty as soon as I write that filter. And the image doesn't appear in the album files in MP3tag, but it does appear in the Windows folder. I mean the "art.jpg" file. But if I select a song from that album, the cover art appears on the left (where you can edit everything else), as if it were actually embedded.

It really is as if there were a completely black cover, because when I open a song with VLC, instead of the typical icon of the cone, I only see a black screen.

I have nothing written in the description of the cover. Only the image of the cover itself. But that's what I'm saying, that it doesn't make sense to open other album and see the cover, but not on this one in particular.

The folder where I keep these songs (the ones that are missing the covers) is called "Aeterna Noctis" (from the videogame). It has no unusual characters. 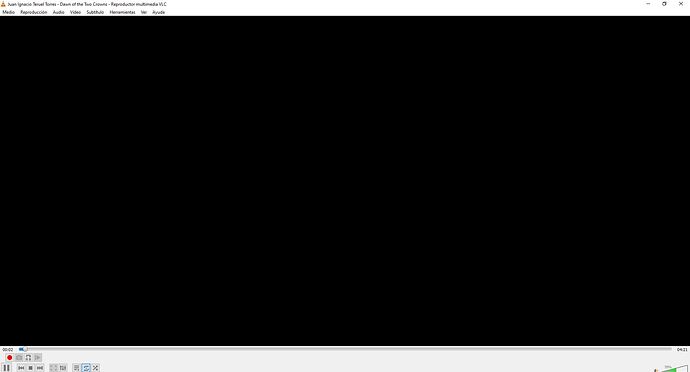 I'm going to upload other album that shows up the cover. 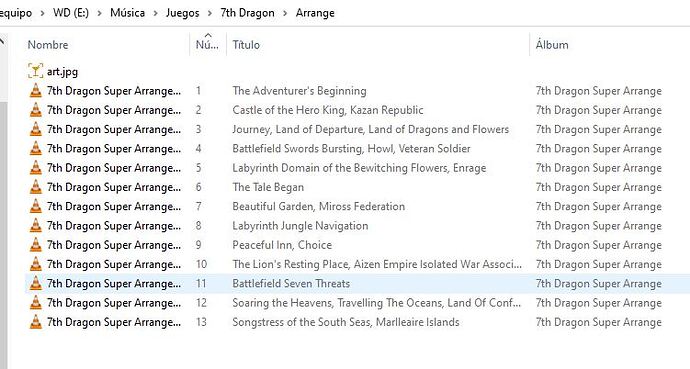 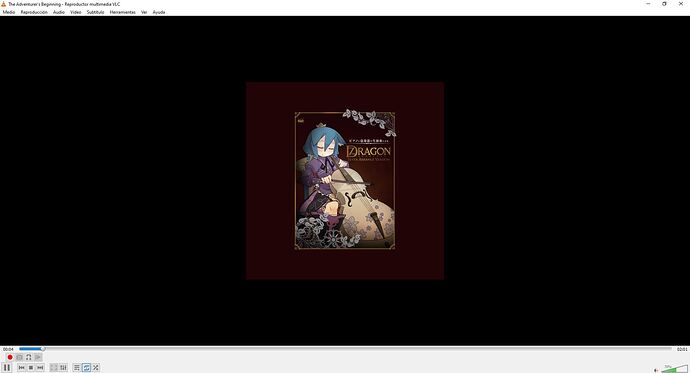 Could you test the files without picture with the tools linked in this thread:

How to check files for errors? Howto

It’s required and often helps to reduce support cycles to check files for errors before filing a bug report. Symptoms of erroneous files are often missing or wrong bitrate or length audible blips or skips tags seem to be sticky and cannot be removed There are some really good tools to check the files for errors, namely MP3 Diags — identifies many different issues in MP3 files Website: http://mp3diags.sourceforge.net Download: MP3 Diags - Getting MP3 Diags MP3val — validate and fix MPEG … 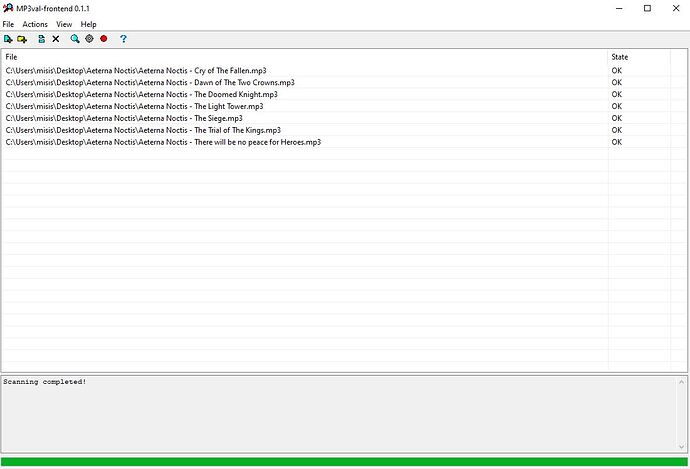 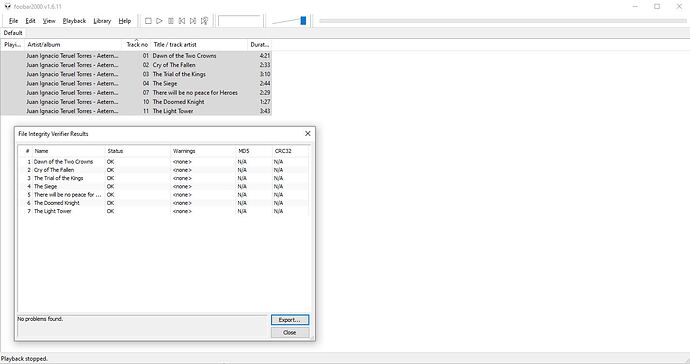 I thinkk the revealing tool here is MP3diags which says it cannot load the picture.
So, please, delete the picture,
check the files again with MP3diags that no other errors pop-up and the one with the picture is gone,
then import / embed a working picture.

Hello, If i export the covers from an mp3 file to the maps i get %artist%-%title%.BIN format and not a *.JPG format? Greetings Emile.

After deleting the cover art:

But still, if I open the song, the black screen still remains. 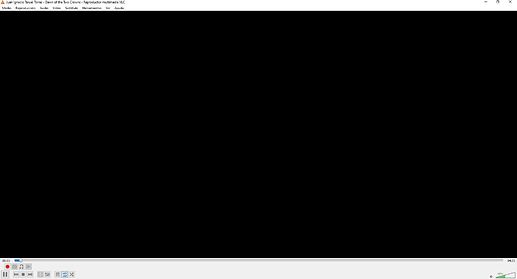 Then, If I change the cover to, for example, the one that I showed you earlier (the one in the album "7th Dragon"):

Still, the black screen remains if I open the songs with that new cover...

And MP3 Diags, after that change into the cover, these are the errors that pop-up:

The first image is the "tag details" in MP3 Diags. 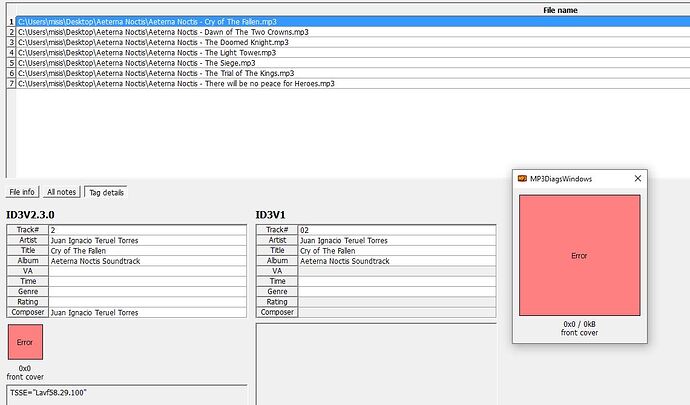 The second image is the "tag details" but for the new cover art. 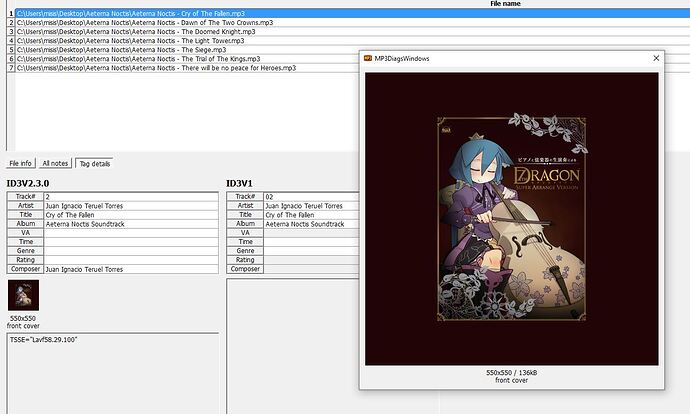 But still, as I said, the black screen remains.

but for the new cover art.

these are the errors that pop-up:

These findings can be ignored.

And as I said in the firts post, the image does show up if I open it in my phone. But here, in my PC, even with VLC or Windows Media, there's no cover to show.

The WMP also has a cache.
Or it relies on the (generated) folder.jpg file which could also be blank/black.
See here the path to the WMP cache:

cover embedded in mp3 file not showng in mp3tag? Support

If that list in the background shows an alphabetically sorted list of filenames then there is no folder.jpg. THis still leaves the thumbs.db file. The bad news will be: if mp3tag does not show the cover then it is probably not an embedded one but one that is stored somewhere externally. The 2 possibilities of the hidden files are the moste likely options. Another question is: where do you see the cover? Only in WMP (as the explorer window does not show covers). Then the cover is most likel…

Ahh, Okay. Yes, it does show up the new cover.

So the problem is the image of the cover?

Yes, as MP3diags showed, the embedded cover was corrupt.
If you replace the embedded image with a good one, the players should show the working image.

But if I go to "details", look how it changes. In "profundidad en bits" which translated to english is like "bit depth". While the first three are 24, the fourth one is 32. I don't see anything else worth mentioning in here. So my guess is that is the problem, maybe?

If you have a decent graphics editor, you could create another picture with a bit-depth of 32 and see whether this also causes problems.
Or it could be that this particular picture was simply messed up and it is not really worth it to investigate further.